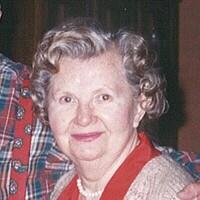 Saratoga Springs, NY - Gloria D. Barkley, 95, passed away peacefully at Wesley Health Care Center (Saratoga Springs, NY) on September 9, 2020.  Born on May 28, 1925 in the Bronx, NY, Gloria was the daughter of Joseph and Rose Dostal.  The youngest of 5 children, she was affectionately called “Snoop”.  The early death of her father during the Depression brought the family together during the 1930s, and they forged close ties that were maintained throughout their lives.  Despite hard times, she delighted in recounting that she sometimes had cake for breakfast!  Gloria was a graduate of Walton High School in the Bronx, had many girlfriends she stayed in touch with, and was a lifelong resident of NYC until her last 8 years.  She moved to Stuyvesant Town in Manhattan shortly after marrying Charles R. Barkley in 1948.   After a brief stint in the business world she settled into the life of a devoted homemaker and spouse. Together, she and Charlie reared two sons, devoting much of their lives to their children.  She returned to work as a bookkeeper once the boys reached college.  A real New Yorker, she mostly enjoyed city life, with summer breaks at the home she and Charlie built on the North Fork of Long Island.  A lifelong Catholic, she valued her faith and connection to the Church.  Quiet, hardworking and caring, she was a stalwart supporter and defender of her children and grandchildren, always trying to be of help to them and to her nieces and nephews when she could.  Many appreciated her thoughtful correspondence over the years.

Gloria was predeceased by her husband of 60 years, Charles; her son, Charles J.; her sisters, Virginia O’Connor, Grace Dostal, and Josephine Callahan, and her brother, Frank Dostal.  She is survived by her son, Thomas (Mina Dunnam); grandchildren, Charles C. (Isabel), Gregory A., Jason A. (Nicole), and Allison Barkley Anderson (Ed Anderson); several great-grandchildren; and numerous nieces and nephews.

A frugal, depression-era baby to the end, she would much rather any monies be spent on the living (have cake!) than on memorials.  A private service and burial will be held at a later date.

Arrangements are under the direction of the William J. Burke & Sons/Bussing & Cunniff Funeral Homes of 628 North Broadway, Saratoga Springs, NY (518-584-5373).

Online remembrances may be made at www.burkefuneralhome.com

When I think of the summers of years ago, I have such fond memories of Gloria and Charles, sitting in church with their granddaughter, Allison. It was during one of those Sundays that we spoke and become instant "summer friends". What a warm and loving couple - their relationship overflowed to Allison and to us as well. They shared their granddaughter with my 2 daughters and those Sundays were delightful. Although she was a quiet woman, it was clear that she was also a woman of...

I brought communion to Gloria for many years at Wesley.
Such a sweet lady. May she Rest In Peace.

To Gloria's Family and Friends,
You are in our prayers during this time of sorrow.
Sincerely,
The Staff at Burke Funeral Home

Never miss an update about Gloria. Sign up today.