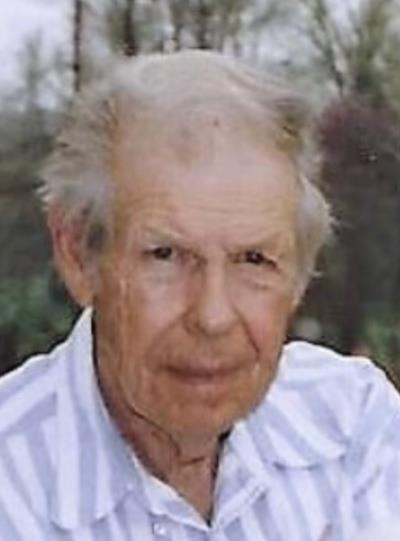 Gordon Lee Vest, 89, of Henderson, Kentucky, passed away Monday, September 6, 2021, at his home from dementia.

He was born June 30, 1932, in Orchardville, Illinois, to parents Mary Margreat and Lowell Vest.  His sister, Dolores, was born 17 months later.  They grew up with fond memories of farm life and together rode the family horse to a one-room grade school.  Gordon’s love of the outdoors was rooted in those early days milking cows and helping his parents and grandparents.  He graduated from Wayne City High School and enjoyed playing baseball as a young man.  In 1952, Gordon enlisted in the U.S. Air Force and served four years working on the electrical systems of aircraft at Otis Air Force Base.  After service, he began a 56-year career in management for Birdwell Division of Seismograph Services, a Raytheon Company, which later became Dresser Atlas.  After retirement, Gordon started his own consulting business.  On call at all times, he traveled to oil rigs all over the tri-state area and years later could pass old rigs and remember their history in detail.  He retired at age 80 as a geophysical log analyst, well known and respected for his vast knowledge, experience, and meticulous delivery of log interpretation.  Gordon was a perfectionist in his work and home life and in his free time spent endless hours on his immaculate yard.  He found great joy in the fall of the year quail hunting with his dogs.

Gordon was preceded in death by his parents and sister.

Survivors include his wife of 41 years, Peggy Ann; one daughter, Lori Powell and her husband, Ron; and two grandchildren, Christopher and Sarah.

Services will be at noon Thursday at Rudy-Rowland Funeral Home.  Lynn Renee Steinwachs will officiate.  Burial will be in Fernwood Cemetery with full military rites performed by American Legion Worsham Post No. 40.

Visitation will be from 10 a.m. until service time Thursday at the funeral home.

Contributions may be made to St. Anthony’s Hospice or New Hope Animal Rescue Center.

Deepest Sympathies to the Vest family. As a geologist working in the W KY oil fields, I first met Gordon in 1984-85 while sitting McClosky wells when he ran Birdwell logging services for the area. His high level of professionalism and detailed knowledge of geophysical logging services (as well as area geology) were always invaluable and second to none. I still have the "Birdwell Well Log Analysis Slide Rule" he used to hand out to geologists. I had the good fortune to meet Gordon...

Please accept my condolences on Gordon’s passing. I first met him because my neighbor Gypsy Brown worked for him at Birdwell. He hired me as a teenager to type logs. I remember him as a kind and wonderful boss. Gordon’s calm demeanor and his expert knowledge and teaching about why I was doing what I was doing were the perfect support for this young person learning how to become part of the work force. I have fond memories of him, Rex, Big John and sorry if I’m missing others he employed and...

I am terribly sorry to hear of your father's passing Lori. Very sad news indeed!!! You remain in my heart and prayers.

So very sorry for your loss Peggy. You are in my heart today.

Never miss an update about GORDON. Sign up today.