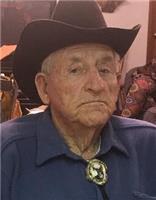 Grover "Spook' Browning died in his sleep at The Homestead Assisted Living Center in St. Anthony Idaho October 20, 2020 at age 95 years and 5 months to the day.

He was born May 20, 1925, in St. Anthony and grew up in Newdale. The Brownings farmed the the land below the timberline along Pony Creek, a tributary to Canyon Creek. He went to the elementary school by the Canyon Creek bridge. He graduated from Sugar Salem High School where he played baseball, football, basketball, and boxed. In track he threw the discus. He lettered in four sports all four years of High School.

At age 18, Grover enlisted to served in the U.S. Army during WWII. He was wounded in Italy, and received the Purple Heart for his service to our country. When he joined the Army, he met Markley Case from the Ashton Idaho area, who remained his lifetime friend. As they were preparing to ship out, Markley stopped in Chicago to say goodbye to his sisters, Audrey and Orsena Case. That was the beginning of a love that would last forever.

While in Italy during WWII, he boxed and traveled for his division, representing the U.S. Army, and once had his wrists wrapped by the legendary boxer Primo Canera.

Grover loved to hunt, fish, and play music around the Newdale area with his dad George Browning and Mer Butler while Betty Klingler and Shirley Clark sang. He holds the State Record for the number one non-typical Mule deer in the state of Idaho. He shared this love of hunting and fishing with family and many friends in South Eastern Idaho.

Grover learned to fly an airplane and was a member of the Civil Air Patrol. He worked for the U.S Forest Service, knew and learned the lay of the land in the Targee National Forest, where he put our horses to work, and made many lifetime friends and memories doing that work.

He and Orsena farmed and ranched together at Canyon Creek area and made time to spend a few weeks of the summers fishing in Alaska from 1979 to 2002, After Orsena's death in 2003, Grover continued his trips to Alaska until the summer of 2019. Many friends and family came along and enjoyed the hospitality of Bart and Renie at their home in Alaska.

He taught his children to farm, ranch and grow a garden. Kirk, Bart, and sometimes Lily took on the farming while Grover worked for the Forest Service. He taught them to ride and care for the horses and cattle. He loved his time on a lake or in the forest being with nature. Even after selling the ranch, he loved to drive up there and enjoy the view of the Snake River Valley. Many people learned to enjoy picking Huckleberries after he shared his favorite patches in the forest with them. Grover was the Newdale Santa Clause for over 25 years and provided Christmas trees to all the widows in Newdale.

In August 2015, Grover got an infection in his toe while fishing in Alaska. The infection turned septic which required him to go into the Homestead Assisted Living on and off for the next few years. Then in 2018, his great-granddaughter Michelle was able to come live with him which made it possible for him to live at his home again, mow his lawn, and enjoy his flowers.

One of his last great pleasures was being able to be in Arizona with Bart and Renie during the spring of 2019 where he was able to be outside on the golf course and enjoy nature and Newdale friends who lived near Bart and Renie in Queens Valley, AZ.

He is survived by his two sisters, Ruth Blackburn and Marian Webster; a nephew Duane Maupin, Lenards's wife Venice Browning; a cousin Laura Crane; and his children Kirk Browning of Las Vegas NV; and Lillian Pitman of Shoshone ID; and Bart and Corinne Browning of Seward AK. He and Orsena had 19 grandchildren, 44 great-grandchildren and 2 great-great-grandchildren.

Funeral services will be held on Friday, October 30, 2020 at 11 a.m. in the Newdale L.D.S. Chapel. The family will receive friends on Friday from 10 a.m. until 10:45 a.m. prior to the funeral. Burial will be in the Teton-Newdale Cemetery with military rites.

Arrangements are under the direction of Bert Flamm Mortuary. Condolences may be sent to the family online at www.flammfh.com.

Here is the video I made in case you missed the funeral. Don't forget the end I added a surprise ♡

I love and miss you Great Grandpa, you will always hold a place in my heart.

Never miss an update about Grover. Sign up today.