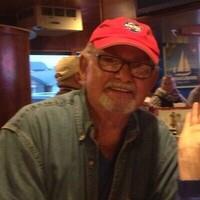 Gurney Thomas Hood departed this earth on June 26, 2020 with Jane holding his hand and his beloved dog, Edgar, sleeping by his side.

Gurney was born in Burgaw, NC.  He was preceded in death by his parents, Gurney Hood and Flonnie Mae Best Hood.

When he was in high school, a friend contacted “I’ve Got A Secret” and Gurney was selected to appear on the show.  He and his sister, Florence, were flown to New York and Gurney appeared on the CBS show in May 1958.  Many lively discussions were held over the years about his appearance on the show.

Gurney graduated from Burgaw High School where he was an outstanding athlete.  He attended the University of North Carolina at Chapel Hill where he walked on with the junior varsity basketball team under the direction of Dean Smith.  He also attended Atlantic Christian College, after which he joined the family business, H&P Wood Turnings, where he worked with his father, his brother-in-law Jay Mills, and his nephew David Mills, until his retirement.

Gurney retired in the early 1990s and began the second chapter of his life when he relocated to Kure Beach, NC.  Gurney loved the beach life where he fished, crabbed, oystered, and gardened.  Gurney was known for his ability to cook for a crowd and many nights in his Kure Beach garage were filled with friends, food, and laughter.

On New Year’s Eve 1992 at Jeane and Bubba Atkinson’s home, Gurney was introduced to Jane Fiery and they were together from that night until his death.  He and Jane maintained a strong relationship with great respect for each other’s independence for 27 years.

In 2003, Gurney was the primary benefactor of a dog park in Kure Beach, appropriately named “The Gurney Hood Barking Lot”.

In 2005, Gurney found a sweet little house on the Northeast Cape Fear River and for ten years, he and Jane spent many hours on the river with their beloved dogs, Scooter and Edgar.

Left to cherish his memory are Jane Fiery, his sisters Dorothy Mills and Florence Strickland (Gaylee), many nieces and nephews, his children Mary Winifred Hood Schwaner (Jeff) and Robert Hood (Mary), four grandchildren, and his many friends and acquaintances in Kure Beach.

Gurney never met a stranger; he would put out his hand and say “Shake hands with a man”.

A memorial service for Gurney will be held within the next month.

Memorial donations may be made to either the Lower Cape Fear LifeCare Hospice (1414 Physicians Drive, Wilmington, NC 28401) -- where Gurney received exceptional care in his final days that will always be appreciated -- or to the Flonnie Hood Scholarship Fund that Gurney established in his mother’s memory in 2003 at  Burgaw Presbyterian Church (PO BOX 565, Burgaw, NC 28425).

We sure will miss Gurney. He was a wonderful neighbor and friend!

Bucky....I remember when you first met Gurney. Glad you had each other. Yall always had a good thing going!!!! Think of you often and miss our nights working in CCU. Your in my thoughts and prayers.

Never miss an update about Gurney. Sign up today.