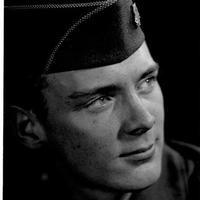 Born on October 16, 1931, and raised in Fulton, New York, Bob caught the photography bug as a young teen, eventually building his own home darkroom to process film and print his photos.  Drafted into the U.S. Army during the Korean War, he served as a still photographer helping develop and produce visual aids used to train MASH doctors and other medical staff and serving in the American Occupation Forces in West Germany.  He received an Honorable Discharge in 1954.  In early 1957, Bob met and fell in love with Kathryn Van Dyke, a native of Plainfield, Illinois.  They married in Plainfield on August 30, 1957 and returned to the Midwest permanently in 1958.  They remained devoted to each other for more than 53 years, until her passing in 2010.

Bob worked for and ran several photography studios over the subsequent years, first in Chicago, then in Glenview, Illinois, eventually rising to General Manager and Principle Photographer.  In 1974, he was honored to serve as President of the Glenview Chamber of Commerce.  In January 1976, Bob was hired by the Harper Leiper Studio in Houston, Texas, where he remained until the studio merged with The Positive Image in the mid-1990s.  In 2001, Bob finally retired. In total, he worked more than more than fifty years professionally as a portrait and commercial photographer.

A life-long lover of the outdoors, Bob spent his adolescent years camping and hiking in and around his hometown both with the Boy Scouts and on his own.  As a young adult, he served as Assistant Scoutmaster of the same Boy Scout troop of his youth.  He later returned to Scouting when his oldest son, Todd, was old enough to join.  He served as Webelos Den Leader, Assistant Scoutmaster and Scoutmaster at the unit-level, then moved up to the district-level becoming a member of the District Committee and serving on the District Eagle Scout Board of Review.  A graduate of the Wood Badge Adult Leader Training Course, he served on the staff of several subsequent courses.  He was also a member of Scouting's honor society, the Order of the Arrow.  After more than thirty years in the program as both a youth and adult volunteer, Bob retired from Scouting in 2001.  Adult-level recognition included the District Award of Merit and Silver Beaver.

In their retirement, Bob and Kathryn travelled to some of their favorite destinations including California and the Rocky Mountains of Colorado and Wyoming.  Private services will be held at a later date.