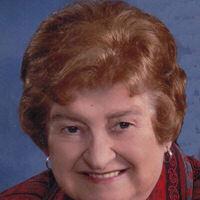 Helen Philbeck Grayson, age 95, died on January 16, 2021, peacefully at home in Shelby surrounded by her family. A native of Blacksburg, SC and daughter of Broadus Randolph and Minnie Moss Philbeck.  She was a graduate of Blacksburg High School, Class of 1941 and attended Gardner Webb College.

Helen was a founding member of Westwood Heights Baptist Church, where she was the treasurer for over 30 years, taught Sunday School and sang in the choir. She received numerous service recognitions from the Greater Cleveland County Baptist Association.

Known for her incredible mind for business and finance, she spent 45 years as office manager for J.C. Penney, first in the uptown location and later at the Cleveland Mall. Helen, along with her late husband Ken, also ran the Shelby High School Concession Stand on Friday nights for 27 years. A sports enthusiast and loyal fan of the Atlanta Braves and her children’s and grandchildren’s colleges and universities. Helen kept meticulous records of scores and players relaying them by text to her grandsons until the end.

Helen never said no when she was asked to help a friend, family member or a stranger. She volunteered at Hospice of Cleveland County, American Heart Association and in numerous roles at her church.

In addition to her parents, she was preceded in death by her husband (of 57 years) Kenneth Ray Grayson, her sister Alda May Grigg, brothers Aydlotte Philbeck, Thomas Philbeck, Broadus Philbeck, Jr., James Campbell Philbeck, and her brother-in-law, Ted Grayson and Ben Grigg and sisters in law,Thelma Batchler Philbeck and Joyce Griffin Philbeck.

Special thanks to Helping Hands caregivers Betty and Melinda, and Hospice of Cleveland County.

The body will lie in repose at Cecil M. Burton Funeral Home and Crematory on Tuesday, January 19th from 10 a.m. to 12 p.m. The family will not be present.

The Gardner-Webb University extended family was saddened to learn of Helen's passing. Our thoughts and prayers are with all who loved her.

A special lady who raised a special family. Remembered with fondness and respect forever!

To Helen's family: I work with Kevin and I know what a great guy he is...that's a reflection on your mom. She sounded like a wonderful person, so giving and helpful to all. I know it's hard to lose your mama, but time will heal all wounds. Peace to you all. Kevin, please let me know if you need anything. ~ Chel

HELEN GRAYSON WAS ONE OF THE MOST RESPECTABLE LADY WE HAVE EVER KNOWN, SHE LOVED GOD, FAMILY, AND HAD THIS GRACE ABOUT HER THAT SHE LISTENED TO EVERY WORD THAT YOU WERE SAYING, SHE LOVED HER 2 SONS AND GRANDCHILDREN, KEN PICKED A DIAMOND IN THE ROUGH WHEN THEY MET EACH OTHER, WE WILL HER PHONE CALLS AS SHE WANTED EVERONE KNOW HER GOOD NEWS, VERY POSITIVE PERSON OUR HEARTS ARE SADDENED ,

We were sad to hear of Helen's passing. Helen and Ken were faithful members at Westwood Heights Baptist Church. Viola and I admired them greatly. We visited her when she was in the assisted living center and called her from time to time. God bless all of the family.

What a sweet, lovely soul Helen was. I worked with her at Penney’s for about 10 years in the office.She taught me so much, she was always eager to help and a lot of fun.
God bless the family and give each of you comfort during this difficult time. Know that her life was a life well spent.