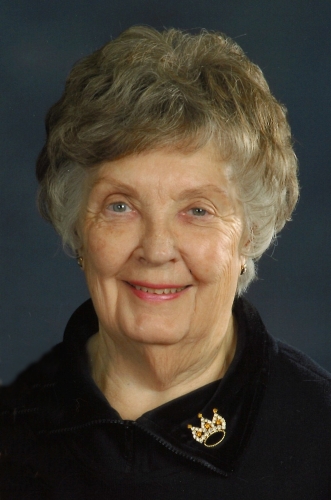 Not the right person? See All ›
LOCATION
Davenport, Iowa
CHARITY
The Charity of your Choice
Make a donation

Funeral services will be held 11:00 a.m. Wednesday, February 19, 2020 at Halligan-McCabe-DeVries Funeral Home in Davenport. Burial will be at the Rock Island National Cemetery. Visitation will be 10:00 a.m. – 11:00 a.m. Wednesday at the funeral home. Memorials may be made to Zion Lutheran Church in Davenport or to your favorite charity.

Helen worked at the Buffalo Bank, retiring in 1979. She was a member of Zion Lutheran Church in Davenport, where she had served as church treasurer, recording secretary, and was active in the women's organizations, and Dorcas Circle. She volunteered at Truman School for Handicapped Children by swimming with the kids. She also volunteered at CASI well into her 80's, and was there to "help the older people."

Survivors include her daughter and son-in-law, Judy and Paul Brandt; grandson, Peter and Ann Brandt, and their children, Ashley and Emily; granddaughter, Dana and Rob Stanton, and their children, Nathan and Paige; step-son, Dennis and Denise Testroet; grandson, Matthew Testroet, and his daughter, Alexia; and step-son, David and Cher Testroet; sister, Deloris Rowson; and many nieces and nephews.

In addition to her first and second husbands, Helen was preceded in death by her parents; brothers, Clyde and Donald Holtz; and sister, Irene Huncke.

A special thank you to the staff at Silvercrest Garner for their expressions of love and comfort care during Helen's end of life journey.