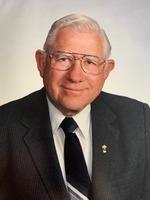 Howard W. Kerr
Feb 20, 1923 - Jan 2, 2020
San Leandro
Howard W. Kerr passed away peacefully on January 2, 2020 at the age of 96. He was born February 20, 1923 in Ramona, CA to Lela Ruth and Jay Russell Kerr. At the age of seven his family moved to Durham, CA (near Chico) where he enjoyed life in a rural community - working on dairy farms, raising hogs and chickens and working plow horses. He later attended UC Davis and UCLA.
Howard met the love of his life at a dance when he asked an attractive young nurse to dance and was smitten. He married Eleanor Grace Gilboy in 1950 and the same year they purchased their first home in San Leandro. They would remain there the rest of their married life. Howard and Eleanor enjoyed 58 years of loving marriage. They traveled extensively visiting all 50 states and many foreign countries.
Howard and Eleanor raised 3 children, sons Jay and Rich and daughter Mary. Howard was a wonderful father. He was always involved in his children's lives, coaching numerous teams, attending all sports events, and encouraging their educational endeavors. Howard thoroughly enjoyed being a father and his kids reaped the benefits.
Howard worked for the City of Oakland for 34 years as an Urban Renewal Representative. After retiring from the City, Howard started on a whole new career. Always interested in contributing to his community, he was elected to the Board of Oro Loma Sanitary District in 1986. He went on to win 8 consecutive elections, serving for the next 29 years. He retired from the board in 2015 at the age of 92! In 1992, he was elected to the San Leandro City Council. He worked on numerous boards and committees and served a term as Vice Mayor.
Howard will be remembered as one of San Leandro's 's leading citizens for 7 decades, working tirelessly for the betterment of the city and its citizens. He led a productive, honorable life and touched many, many people. In addition to his sons and daughter, Howard is survived by 6 grandchildren and 2 great grandchildren. He will be dearly missed.
Visitation will be 4 - 8 pm on Thursday, January 9th at Grissom's Chapel & Mortuary, 267 E. Lewelling Blvd., San Lorenzo. Funeral services will begin at 11 am on Friday, January 10th at Heritage Baptist Church, 2960 Merced St., San Leandro. Howard will be laid to rest at private ceremony at Sacramento Valley National Cemetery.
In lieu of flowers, donations can be made to Howard's favorite charities, Shriners Hospitals for Children or St. Jude Children's Research Hospital.

Howard Kerr was often a fixture at Little League practices in the Washington Manor area of San Leandro. He was also a close friend of Frank Guerrero who coached CYO baseball for St. Felicitas and often helped coach practices and games. His knowledge of pitching and hitting was exceptional and I learned so much by just watching him, and there are drills that I never forgot and used when I coached in my career in education...His dedication to the youth in the Manor was so Exemplary and we were...

My heart is so sad to hear of the passing of your father. I always loved him and your mother. They were always so good to me. Howard was a kind, honorable man with great integrity. May he rest in peace. Cindy Carlson