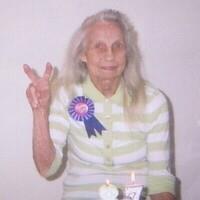 Irene Verna Steele was born on May 5, 1924 to Lawrence E. and Clara L. (Reckward) Steele in Postville, Iowa.  She attended school in Allamakee and Winneshiek counties.

Irene married Joseph E. Anderson in Decorah, Iowa.  They had three sons: James Irwin, Theodore Lee and Richard Dean.  They later divorced.  Irene then married Leslie B. Baker in 1969 in the Little Brown Church in Nashua, Iowa.  Leslie passed away in 2010.

Irene lived and worked most of her life in La Crosse, Wisconsin.  She worked in healthcare at both Gundersen Lutheran and St. Francis Hospitals in La Crosse. She also ran a rooming house from the 1960’s to 2010, 50 years.  Her renters enjoyed her kindness and outstanding personality.

Irene was a member of Our Redeemer Lutheran Church of La Crosse. She was active there and taught Sunday school. Irene was also a den mother for the Cub Scouts.  Irene was a hard worker and shared her skills with others.  She enjoyed taking care of others, both in nursing and community settings.

She was preceded in death by her parents; her husband Leslie B. Baker; two sons, James Irwin Anderson and Richard Dean Anderson; four sisters and four brothers.