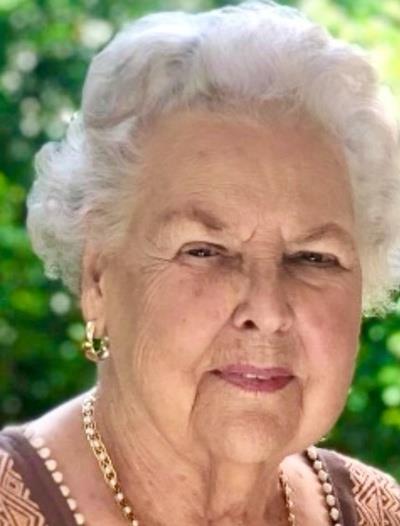 IRENE LANCASTER - Irene Francis Lancaster, age 96, of Columbus, MS, passed away October 5, 2021, at Trinity Personal Care.  Funeral services will be Saturday, October 9, 2021, at 3:00 PM at Memorial Gunter Peel Chapel 716 2nd Ave. North location with Rev. Bobby Sanderson officiating.  The interment will immediately follow at Friendship Cemetery.  Visitation will be from 2:00 PM until the time of the service.
Irene was born in Smithville, MS, on April 2, 1925, to the late Ebro Swancy Burrow and Virgie Francis Burrow of Smithville, MS.  She was a graduate of Smithville High School, Blue Mountain College and Mississippi State University.  She was a high school basketball player.  She taught school for over 35 years starting at Hamilton, MS, New Hope, Lee Junior High and Cook Junior High in Lowndes County, MS.  She was a proud member of the Daughters of the American Revolution.  Irene enjoyed playing cards.  Over the years she had many fellow card players and they enjoyed Friday afternoon sessions.  She followed all sporting events of her children, grandchildren, and was a Mississippi State Bulldog.
Irene was a 70 year member of First Baptist Church of Columbus, MS.  She will always be remembered as a true Christian, wonderful teacher, faithful friend, loving mother, MeeMee to many grands and beloved wife.  In addition to her parents, she was preceded in death by her husband, Otis Glenn Lancaster, and daughter-in-law, Alice Stallworth Lancaster.
Survivors include her two sons, Judge Robert L. "Bob" Lancaster, and William Otis "Bill" Lancaster and his wife Lynn, grandchildren, Lea Alice Lancaster Parker and her husband Matthew of Arlington, VA, Katie Lancaster Johnson and her husband Bill of Nashville, TN, Dr. Richard Jeptha Lancaster and his wife Chelsey of Fairhope, AL, Tracee Michelle Shoaff and her husband Torey of Eads, TN, Michael Brenton Lancaster and his wife Amy of Hendersonville, TN, William Bowen Lancaster and his wife Shiloh of Brandon, MS, Brett Wayne Delk and his wife Megan of Chesterfield, VA, Dana Delk Butler and her husband Michael of Pike Road, AL, eight great grandsons and seven great granddaughters.  Irene is also survived by her sisters Maudean Carter of Muscle Shoals, AL, and Brenda Burrow Shackelford of Amory, MS, and her brother James Arthur Burrow of Amory, MS.
Pallbearers will be her grandchildren, Brent Lancaster, Bowen Lancaster, Richard Lancaster, Blake Lancaster, Andrew King, and Knox Parker.
Memorials may be made to First Baptist Church, P.O. Box 829, Columbus, MS, 39703.

We are praying for this family as they say goodbye to "Miss Irene" Lancaster! I know she has made an impact on many in her lifetime. Prayers for all of you! Ronnie and Carla Guyton

Condolences to the family of Irene Lancaster. She was an inspiration to me as one of my favorite middle school teachers. Then later, she and Otis were so kind to me and encouraged me to enter training to become a county executive director with USDA-ASCS (later Farm Service Agency). As president of MACOE (our state association), I enjoyed time spent with them at many NASCOE national employee association conventions. I appreciate Irene as a role model in my life. May God bless each family...

Mrs. Lancaster was my 8th grade teacher at Joe Cook she was such a sweetheart I use to say Mrs. Lancaster was a hard teacher but as an adult I thank her for everything she taught me in the book and out the book I often find myself telling my children's about my teacher Mrs. Lancaster. I will always remember you my teacher. God picked a very sweet ,kind, and loving person to place in the school system and in our lives for a reason and a season You will be miss Mrs. Lancaster