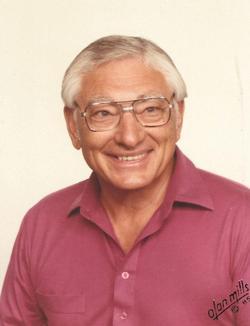 Iva Rudolph (Rudy) Palmer was born in Greenbrier, Arkansas on January 17, 1929 to Roy Isaac and Ida Lou Thomas Palmer. He passed away on February 13, 2015 at Christopher House in Austin, TX.

He was preceded in death by his parents and his brother, I.B. Palmer.

He married the love of his life, Mary Lou Stanley, on June 1, 1951. They spent 63 wonderful years together.

He served in the U.S. Air Force and was stationed at Lackland Airbase in San Antonio. Rudy was an oil operator in Abilene, Texas before retiring and moving to Austin 10 years ago to be closer to family.

Mr. Palmer was a lover of golf, football, fishing, and especially baseball. Rudy played baseball in college, professionally after college for the West Texas/New Mexico league, and during his time in the Air Force with the Special Services team.

At the request of Rudy, no public service is planned. Visitation for friends and family will be held at All Faiths Funeral Chapel North, 8507 N. IH 35, Austin, TX. from 5-6 pm on Saturday, February 14, 2015.
Following visitation, a private immediate family only, memorial service will be held from 6:30pm-8:00pm.

Rudy was a gentleman and role model

It was my honor to know and care for him at the Austin VA.

Never miss an update about Iva. Sign up today.