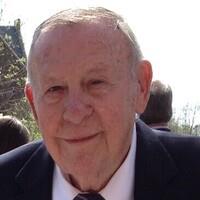 Steve, as he was known, was born in New York City to the late William and Catherine (Conway) Murphy on December 26, 1930.  A graduate of Cardinal Hayes High School Bronx, New York and the U. S. Coast Guard Academy, New London, CT where he earned his degree in engineering.  He met the love of his life, Evelyn, they married in 1955 and located to Middletown to raise their family.

He volunteered his time and talents to his community throughout his years serving as a member of the Middletown Jaycees in the 1960’s and the Inland Wetland Committee in the 1970’s.   After his retirement he continued in the same spirit volunteering to teach English as a Second Language and helping seniors prepare taxes with AARP Tax-Aide. He was an active and dedicated communicant of St Pius X Church.  Prior to his retirement Steve was employed as an engineer with Pratt and Whitney Aircraft for thirty years.  He enjoyed a NY Giants game, vacations on Cape Cod with his family and time spent with friends.

Along with his parents he was predeceased by his son, David Murphy of Middlefield CT and siblings, William Murphy and Mary Crotty.

Evie and Murphy Family - Deepest sympathy and condolences on the loss of Steve. I have known him since 1948 when we were both cadets entering the Coast Guard Academy. Steve was a fine athlete on the 1951 undefeated football team, fun loving and really admired by all his classmates. We always enjoyed seeing Steve and Evie at reunions. He will be missed by all his Academy friends.

Aunt Evy, Stephen, Pam and Cindy, so sorry to hear about Uncle Steve. Many thoughts and prayers to all of you. I loved uncle Steve. I always enjoyed spending time with him at our family get togethers. He had a warmth and humor that always made me feel like he cared and we always had such fun. Stinger anyone?! The "greatest generation" is getting thinner and thinner. Know that we will do all we can to keep your example as family going. Love you all! John and family

Mrs Murphy , Stephen , Cindy and Pam . Sorry I cannot attend but my thoughts and prayers are with you guys. Living in the area I know the love and support of your dad was always there. My best also to Chelsea and Eric ( who I had the pleasure of coaching ). Many happy memories will hopefully ease the pain. Miss you all
Teresa Opalacz

Mrs. Murphy, Steve, Pam, Cindy and Family, my prayers and sincere condolences are with you. Mr. and Mrs Murphy were favorite parishioners of mine at St. Plus X and they would always attend young Steve’s CYO basketball games in
which I had the pleasure of coaching. His son Steve was one of our stars as was Mr.Murphy with his enthusiastic support. He always had a friendly smile and supportive comments for me and the team and would always called me “Coach”. I enjoyed our conversations and...

Never miss an update about J. Stephen. Sign up today.