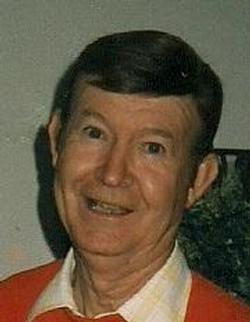 Jack C. Norris
May 14, 1924 – November 3, 2015
Jack Norris passed away peacefully on November 3, 2015, in Richmond Beach, Washington. He was 91 years old.
Jack was born May 14, 1924 in Seattle, grew up in West Seattle, and attended West Seattle High School. In 1943, Jack enlisted in the U.S. Navy, volunteering to serve in the submarine service during WWII. He proudly served aboard the U.S.S. Bluegill, homebased in Perth, Australia. The Bluegill patrolled the South Pacific, logging numerous sea battles. Jack completed his naval service, returning to the U.S. on the U.S.S. Bergall in 1946. Jack's service as a submariner had a profound influence on his life and framed his future work on several civilian defense projects.
In September 1947, Jack met the love of his life, Marjorie Noonan, at a Chancellor Club dance aboard the Virginia V, one of Puget Sound's original Mosquito Fleet steamers. Marge and Jack were married May 1, 1948 at Holy Rosary Church in West Seattle. Jack earned his Bachelor's degree at Seattle University in Philosophy/English. He worked briefly as a reporter for the Seattle Post Intelligencer, prior to starting work in the aerospace industry and federal government service. While at Boeing, he worked on the B-52 Bomber, Boeing 707 and 747, and the Minuteman ICBM. Jack also worked a short time for NASA on the Apollo Moon project. Jack and Marge regularly attended naval submariner reunions throughout the U.S. to reconnect with other veterans. They also traveled together throughout the U.S. and to China and Europe, especially treasuring their visits to Ireland and Rome.
Jack and Marge lived in West Seattle, Bothell, Bremerton, Florida, Colorado, Texas, and California. Though they lived in several places around the U.S., they fondly considered West Seattle, Bothell, and Bremerton their home towns.
Jack was married for 67 years to his beloved Marge, who preceded him in death on July 20, 2015. He was also preceded in death by his father Herbert G. Norris, mother Stella Crumrine Norris, sister Violet (Jack) Ryan, and brother Herbert (Eva) D. Norris. Jack is survived by son Michael (Karen) Norris; grandson Kevin (Brittany) Norris, and great granddaughter Kinsley; granddaughter Sarah Norris; three sisters-in-law; and many nieces and nephews.
Jack's family wishes to thank Right at Home and Providence Hospice caregivers, who provided excellent care during Jack's last few months of life.
Recitation of the Rosary will be Wednesday, November 11th at 10:30 AM followed by the Funeral Mass at 11:00 AM, BOTH at Our Lady of the Lake Church at 8900 35th Ave. N.E., Seattle. Interment at Holyrood Cemetery, Seattle.
Remembrances may be made to Alzheimer's Assn., Washington Chapter, North Tower, 100 W. Harrison St., N200, Seattle, WA 98119.
Guest Book at Harveryfuneral.com Hoffner Fisher & Harvey.

Our Lady Of The Lake Church

Our Lady Of The Lake Church