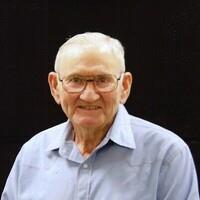 Jack was a veteran of the U.S. Army and served during the Korean Conflict.  He married Ida Lee Sholer on June 2, 1956, in Poteau, Oklahoma.  He was a member of the Teamsters Union 886 and worked as a freight handler for 34 years before retiring.  He was a longtime member of the Crossroad to Life Baptist Church in Blanchard.  Jack enjoyed raising and training horses and was a member of the National, Western, and Central Cutting Horse Associations.  He also trained border collies.  In his spare time, he enjoyed the outdoors, quail hunting and fishing.  His greatest enjoyment came from spending time with his family and friends.  He will be greatly missed by all who knew him.

Funeral service will be held at 2:00 P.M., Thursday, October 21, 2021, at Crossroad to Life Baptist Church in Blanchard.  Burial with military honors will follow in the Blanchard Cemetery.  Arrangements are under the direction of Eisenhour Funeral Home of Blanchard.  Online obituary and guestbook are available at www.eisenhourfh.com.

He was long time friend of my Father. Royce Larman. I miss those time coming out to his ranch and watch him break horses.. I know him and my Dad having great time visiting!!

I could write a book on him and Aunt Ida ,Gordon, Steve, and Sarita they really stepped in and helped my father and Tammy out lots of memories sir love u

I will miss Jack very much. He was always there to help with tools and advice when we was cutting and bailing hay on the farm. We had many great lunches together. Rest In Peace.

Sarita, Gordon & Steve: I am sorry for Uncle Jack's Passing, I pray and asked The Good Lord to pick you up and cradle you, and carry you through this difficult time.
"Sweet Uncle Jack"
Precious Memories, how they linger... I was so very blessed to have Uncle Jack in my life, he walked in Strength, Courage and Determination. A "True Cowboy" to me, well respected, honest, original, unique, strong morals and character, he...

I am so sorry for your loss! Jack was a very nice man, & when Ida could no longer visit the library, Jack would come for her. Prayers fir your family.

Steve, Austin, Catie, Gordon & family and Sarita & family, so sorry for your loss. Our thoughts and prayers with you. Enjoyed time with Jack and Ida at Austin's games. Love, Art and Mary Lou Caro