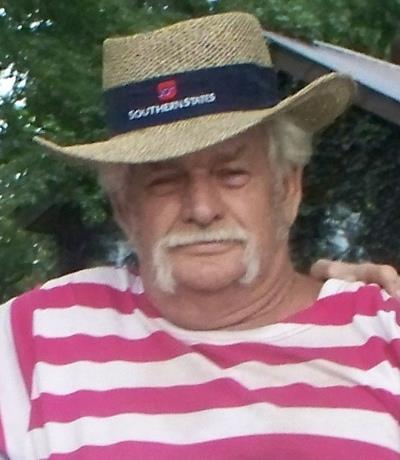 Known as Jackie, Mountain Man, or Rusty, he was born and raised in Niagara, Kentucky.

Jackie enjoyed hunting, fishing, and any type of carpentry work.  He truly enjoyed making his own furniture for his beautiful log cabin that he had built with his own two hands. Jackie served his country by enlisting in the U.S. Air Force at the age of 21.  He was stationed at St. John’s Newfoundland where he had worked on the T3 iceberg known as the Drift Station.

He worked at Whirlpool Evansville, Peerless Pottery of Evansville, and owned a Barbecue restaurant and Fish-market in Henderson, Kentucky.

When Jackie wasn’t working, he was enjoying countless hours on the Green River fishing for catfish and singing Hank Williams songs.  Jackie also enjoyed spending time with family and friends telling endless hours of stories that would take you on adventures through his childhood, The Nut-fry he held for years, and many other stories in his home on Niagara Lake.

The sole remaining surviving sibling is his baby sister, Nancy Leeg Jankowski of San Diego, California; and nieces and nephews.

Services will be at 1 p.m. Saturday, September 4, 2021, at Rudy-Rowland Funeral Home.  Burial will be in Gish Family Cemetery in Niagara, Kentucky.

Visitation will be from 10 a.m. until service time Saturday at the funeral home.

This was my big brother who meant the world to me. There were eight of us, me being the youngest and now the only one left. I loved you big brother and you will be missed but well remembered. You were loved by all RIP without pain. This world is not our home we’re just passing through.

R.i.P.
Our sympathy with the family.
Yours in Germany, Thuringia

This man was a very dear person to my late Dad Clyde Ligon we lived in Niagara as well I use to love to to Jackie lake and fish and walk around and enjoy all his animals he has a few .Jackie please tell my parents I love and miss them and you and dad enjoy your selfs together once again

Jackie was always a special person. Remember having fish fries and music. He was very unique. I always called him a mountain man. He was one that knew how to live off the land. He was a person that if people had to survive solely from the land and not material things he would be the person you would want to survive with. He did things his own way and that was okay because he made his own way in life. He got what he needed out of life and we really could have learned a lot more from him. Rest...

In Loving Memory of JACKIE A. LEEG. An eternal memory that will continue to grow. Our deepest sympathies to the family.

I was introduced to Jack by my dad, back in the spring of 1979, you see, him and my dad had been friends and running buddies since sometime in the 1950's. They even worked at Peerless Pottery, in Evansville together, my dad was a truck driver for them, and I believe Jack actually worked in the factory. I was only 14 when I met him. Dad had kind of lost touch with Jack over the years, but in 1976 we moved from Evansville, out in the country close to Sebree, Ky. Dad found out about Jack...

Nancy, what great times we had with Jackie over the years! What a character and a great person. Jackie inspired everyone he met. There will never be another.

Became acquainted with the real Jackie, after 2020. Always heard the name, a fixture in Niagara community.
Decided to have my mother’s 90th birthday party at his wonderful cabin. He was that special. 90 balloons lining that lane to his cabin. That “Gish” connection.
Sharon Walker Evans

Never miss an update about JACKIE. Sign up today.