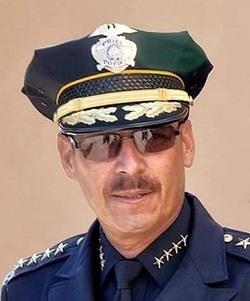 JAIME R. MONTOYA, 52, of Las Cruces, made his final call of duty on January 3, 2019 at 3:05 p.m. Jaime was born on April 16, 1966 in Wiesbaden, Germany to Victor and Felisa Montoya. Jaime married Bernice on June 12, 1997 and they remained best friends until his passing; por vida…right babe! Jaime will be reposing on Thursday, January 10, 2019 from 3 PM to 5 PM at Baca’s Funeral Chapels, 300 E. Boutz Road. The Holy Rosary will be recited the same evening at 7:30 PM in Immaculate Heart of Mary Cathedral, 1240 S. Espina. Family and Friends will join together to celebrate the Funeral Mass at 10 AM on January 11, 2019 at the same church. The Rite of Committal and Interment will follow in the Doña Ana Cemetery where he will be laid to rest. There will be a reception at Our Lady of Purification Parish Hall immediately following the funeral.

My absolutely amazing husband had an impressive career in law enforcement. I invite you to go on line and learn more about his accomplishments.

Not only was Jaime an awesome officer, he was also a son, a husband, a father, a grandfather, an uncle, a cousin, and a friend and mentor to so many. This is what the people who knew him best and outside of work thought and still think about him; he WAS THE VERY BEST MAN EVER, and we lost a true hero. Jaime was strong and smart and tough when he needed to be. He was also kind, warm, honest, loving, faithful, true-to-his word, no nonsense, and funny. If anyone had the opportunity to interact with him, you knew where he stood from the get go. He pulled no punches and said it the way it was because, in his eyes, “that was life…deal with it.”

There are a million great words that could easily describe Jaime. Know that he was the very best husband and life partner anyone could have dreamed for (heart and soul); he was a great son to his parents and his in-law parents; he was an amazing brother to all his siblings and in-laws. He loved all of his children and grandchildren; especially his “little sweetheart.” He loved all of his nieces, nephews, aunts, uncles, cousins, and friends. To those of you that he mentored in any way, he loved you all and only wished the very best for each of you. Daniel, as he said, “you’re the son he never had.” Joey, he truly enjoyed sharing time with you at the church, “you’re a good kid.”

Unlike most, Jaime’s family was not limited to the traditional family but also his brothers and sisters in blue. If you looked through his phone logs, you would see family, but also see hundreds of three digit badge numbers. He remembered every single one. He was not just a father to those who called him so, but also to the many men and women who called him chief. Whether he was giving Christmas briefings four times a day, calling you into his office for a tough life lesson, or hurting over a black band over his badge, he was the truest leader. This was his greatest achievement, it was not physical, it did not earn medals or make the news, but the teaching of morals and values to the officers and community he dedicated his life to. In this chaotic world of policing, Jaime taught only peace and understanding. He was a true leader, a father figure, and a light in the darkness.

Jaime was a very simple, honest person and never let his titles go to his head. He was honored to have been able to contribute to the growth of his beloved police department. He was humbled each and every time he was recognized for doing something that he considered was “just his job.”

It was his character, this legacy, his friends, and both of his families that allowed him to leave this world in the same peace that he lived in it and taught those who will miss him for forever.

Entrusted to the care of Baca’s Funeral Chapels of Las Cruces, 527-2222 Your exclusive providers for “Veterans and Family Memorial Care.” For online condolences logon to www.bacasfuneralchapelslascruces.com

I still cant believe he is gone. I didnt know him long but in the short time I did know him I really enjoyed talking to him and spending a little time with him. He will be missed.

My sincerest condolences to Bernice, Val, Isaac, Alex, Alexis, and the whole Montoya and Medina family. My memories of Jaime are happy ones, both personally and, later on, professionally. It's easy to recall his smile and even how he would peer over the top of his glasses. I will always remember him as funny, honest, genuine, and a good man who loved his family and demonstrated integrity consistently both on the job and in his personal life. Praying for continued comfort and strength in...

I miss you everyday dad, rest in paradise

MAY OUR GOOD LORD WELCOME JAIME INTO HIS HEAVENLY KINGDOM WITH OPEN ARMS, FORGIVE HIM OF ALL SINS, SIT HIM AT THE RIGHT HAND OF THE FATHER AND ALLOW HIM A JOYFUL ETERNAL LIFE WITH HIM AND HIS LOVE ONES. MAY THE PERPETUAL LIGHT OF LIFE SHINE UPON HIS SOUL FOREVER. REST IN PEACE MY BROTHER IN BLUE YOUR UNCLE LEE MEDINA.

Faith, Gabino, Cesareo. My deepest condolences in the passing of your brother Jaime. Doesn't seem right, for somebody that apparently accomplished so much in his life, to be taken away so early. Seems like it was just the other day we thought we were so cool, hanging out all back of the bus. I would have really liked to deliver this message in person, see you guys again, but I guess life has plans for us all. Again, sorry for your loss, and I wish health and happiness for you and your families.

Bernice,
I had the good fortune of getting to meet your husband while working at the Police Department, and was then blessed to have had the opportunity to work with you later on. My deepest condolences to you and your family in this time of grief. May the Lord comfort all of you and welcome Jaime into his heavenly kingdom.

We didnt know Jaime but we have known his father, Victor for over 50 years. We want to express our condolences to all the family. Losing a Son is so hard. We will pray for Jaime. May he Rest In Peace.

Bernice and family,
I will always remember Jaime as Grandpa Honey... and I used to call him "Chief Grandpa Honey", because his granddaughter had called him that. He was a wonderful man, and always so caring. When ever I saw him, while working at the City, he never hesitated to give a hug, or a kind word. He will be sorely missed in our community.
May God bless you!

Bernice - Praying for you and your family and may God bless you in this time of sorrow.

Never miss an update about Jaime. Sign up today.