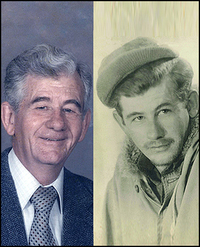 James R. 'Boots' Beatty
AIKEN - Mr. James R. "Boots" Beatty, 99, passed away Wednesday, February 19, 2020.
Mr. Beatty was born on August 2, 1920, in Doerun, GA, a son of the late John Vernon Beatty and Lula Maggie Hilton Beatty. Boots proudly served his country in combat in the European Theater during World War II as a member of the First Special Service Force, and was the recipient of the Bronze Star and multiple other medals. As a member of the FSSF, he was a recipient of the Congressional Gold Medal in 2015, and participated in an Honor Flight that year.
He is survived by his son, David J. Beatty of Aiken, daughters Patricia (Jim) Hamilton, Columbia, SC, and Heather W. (Kenneth) Bailey, Irmo, SC, brother, Jack V. Beatty, Orlando, FL, grandchildren, Rev. John (Pam) Hamilton, Lexington, SC, Kelly Hamilton, Columbia, SC, Holly Hamilton, West Columbia, SC, and Scott (Britt) Rodgers, Kennewick, WA, seven great grandchildren and 12 great great grandchildren; a multitude of nieces, nephews, and great nieces and nephews.
In addition to his parents, he was preceded in death by his beloved wife, Aileen Allan Beatty, brothers John, Bill, and Joseph "Red" Beatty, and grandsons Jimmy Hamilton and Daniel Hamilton.
A memorial service with military honors will be held at 3:00 PM Saturday, February 22, 2020, in the SHELLHOUSE FUNERAL HOME CHAPEL, 924 HAYNE AVE., AIKEN SC, with Rev. John Hamilton officiating. The family will receive friends following the service.
In lieu of flowers, please direct memorials to Tunnels to Towers (tunnel2towers.org)
The family would like to extend the appreciation to the administration of DayBreak Adult Care and their loving caregivers Dianna Holden, Rosemary Lowther, Allison Cooper, and Dianne Prince. They made the last few years of his life so happy and comfortable for him and his family members.
Mr. Beatty's online guest book may be signed at www.shellhousefuneralhome.com

So sorry for the loss of your dad. We will keep the family in our thoughts and prayers.