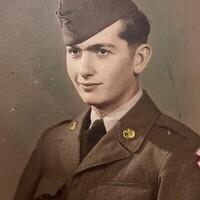 Everything in the middle was simply, living life with his family on his journey to finding God. Then he began loving God, serving God, talking to and about God, reading and spreading God’s word, and giving gospel tracts to everyone he could catch. Loving and laughing with his family (his Kroger family included), and friends. He was a sucker for triple coupons, double coupons, single coupons, price matching, markdowns, and outdated items. He loved getting good deal stuff, free stuff, cheap stuff, and sharing that stuff. Jim was a MASTER COUPONER. I’ve never seen anyone more frugal, or come back from the store with more money than he left with after “buying” a cart full of groceries. It was amazing and it runs in the family.
Jim worked in the tobacco fields as a youngster to help support his family. Around the age of 17, Jim was honored to be sworn in by his brother Lee, as Pulaski County Deputy Jailer. He went on to proudly serve his country as a Sergeant and a surveyor in the Korean War at the age of 20. He also worked for Ford Motor Company as an inspector but He refused to abandon God’s word to rest on the Sabbath, and he left the Ford Company. Later, Jim found different ways to support his family. He held a few other jobs working for “the man” then decided to go out on his own. He began buying and selling cars, construction work, carpentry, electrical, and plumbing among other things. Eventually Jim was deemed disabled due to his service in the military and was able to take less and less work over the years. Jim trusted, and no matter what, God always provided.
A few years after leaving the military, Jim moved to Indianapolis, Indiana. There, he met and married, Billie Grooms, the mother of his eldest sons, Ricky and Gerald. A few years into their marriage, while, working at Ford, Jim met a co-worker that shared his beliefs in God and served Him as a preacher. That preacher gave Jim a gospel tract that changed his life forever. Jim and the preacher became quick friends and spent all the time they could praising God and welcomed anyone that wanted to join them. Jim’s relationship with God was quickly growing stronger. Jim soon got a strong desire to take his relationship with God more seriously. Unfortunately, his marriage to Billie wasn’t strong enough for this change. Their marriage soon ended in a nonconsensual divorce. However, Jim stood firm in his belief in God’s word and refused to agree to divorce and was jailed for a year. He spent the next few years focusing on his relationship with God. He spent as much time as he could in church, praising God with his new found family. Although, neither were in church looking for a new spouse, that’s where he met widow, Nancy Strange, They knew almost instantly that God was at work and they were married about 6 months later. Nancy was the mother of his step-children, Allen, Gary, and Cathy, and soon, his youngest son, Stephen. A few short years after they were married they moved back to Jim’s hometown in Kentucky. Soon after, Nancy was diagnosed with breast cancer and was told she had only 6 short months to live. Nancy, thankfully, served God with her, adoring, husband and their young son, Stephen and grew in the Lord until October 21, 1996, A SHORT 12 YEARS LATER!!! Nancy went to be with the Lord just a few months before Steve’s high school graduation. After about 7 years Jim moved back to Indianapolis where he continued to serve God in every way he could. He was a tract givin', soul winnin', coupon spendin', bachelor for the next 22 years, finding deals and being a fisher of men at every opportunity he could make. One day, he was “Krogering” in his favorite spot in the whole store and he found the deal of a lifetime! Jim approached a short little red head and they began to talk about God. Soon, Jim and Irene fell head over heals in love in the clearance aisle and were married March 18, 2019. They loved a lifetime’s worth in their short marriage until Jim went on to be with the love of his life…JESUS CHRIST…THE LORD ALMIGHTY.
Jim is waiting for all of us and the probably hundreds of thousands of people he spoke to about God to meet him at the right hand of God one day…until then he will be deeply missed.
A celebration of the life of Mr. James ( Jim) Bingham will be held, Saturday, May 22 in the chapel of Pulaski Funeral Home.
Pulaski Funeral Home is honored to assist the Bingham family.