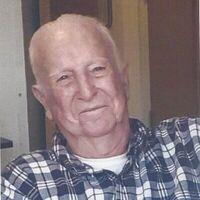 Beloved Father of Debra (David) Wiley and Timothy (Cindy) Gross. He was preceded in death by his wife, Verna, his son Thomas Gross, daughters Donna Simmons and Doris (Jerome) Prater.

A member of the greatest generation. Jim rarely spoke of his service as a WWII solder in the U.S. Army. The Private First Class from Battery C 549 AAA served two tours overseas, as a weapons crewman receiving 3 Bronze Stars.

He came home to a job with Laclede Gas where he retired after 30+ years. He was a simple man, who enjoyed the simple pleasures in life: a quick shower, a clothesline and a buffet. But most of all, he loved his family.

His personality lit up any room. His smile was contagious, even through a window, during a pandemic. He loved the outdoors, wilderness and especially birds. He had the best memory, he could tell you everyone’s birthday, anniversary and times of things like it happened yesterday. Today, we know he’s in great company smiling down on the rest of us. We will cherish the memories until we meet again.
We love you, Jim.

I’ve known Jim for a long time and every time we talked he made it a great conversation. For some reason it slipped passed me that he served in WWII. What an honor it was to see him honored today at the service. I would have loved to hear his stories of fighting in the war and his days in the service. So much respect for him.
I’m so glad I met Jim through family and that I got to enjoy the great man he was.