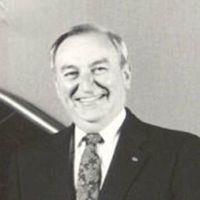 James E. Marley, our loving husband, father, grandfather, great-grandfather and friend, died peacefully on January 25, 2020. He was surrounded by his family in Vero Beach, Florida.

Jim lived an incredibly full and distinguished life. In addition to his immensely successful business career, he was a man who consistently demonstrated service and kindness to those in need. Jim epitomized the very best characteristics of a servant leader. His fundamental beliefs in academic excellence, perseverance, loyalty, and dedication guided his life and career as an executive and philanthropist. An avid sportsman who loved hunting and shooting, Jim also enjoyed sharing his decades-long passion for Penn State football with family and friends. A true gentleman who treated everyone with respect and dignity, he inspired others to work hard, be compassionate, and never give up on their dreams.

Jim was a graduate of Pennsylvania State University, B.S. in Aeronautical Engineering (1957), and Drexel University, M.S. in Mechanical Engineering (1963). He was employed at AMP Incorporated from 1963 to 1998 and held many executive positions including President and Chief Operating Officer, and Chairman of the Board. He was a founding member of Sageworth Trust Company and was the owner of Bavarian Select Auto. His list of credentials includes holding numerous patents and serving on dozens of Boards to include Armstrong Holdings, Inc., Meritor Automotive Inc., Harsco Corporation, Penn State University as the Chair, College of Engineering’s Grand Destiny campaign, Pinnacle Health System, Inc., and more. He has also served as Chairman of the Pennsylvania Chamber of Business and Industry.

Jim and Melinda continually demonstrated their commitment to giving through their philanthropic efforts which includes the establishment of The James and Melinda Marley Emergency Needs Fund through the Perry County Community Foundation; endowments and scholarships to Penn State University; Indian River Hospital Foundation; Pinnacle Health System Foundation; YWCA of Greater Harrisburg; and others too numerous to mention.

In lieu of flowers, memorial gifts may be made to the Trinity Episcopal Church of Vero Beach, 2365 Pine Ave., Vero Beach, FL 32960 (in memory of Jim Marley), The James and Melinda Marley Emergency Needs Fund, c/o The Foundation for Enhancing Communities, Perry County Community Foundation, 200 N 3rd St, 8th Floor, Harrisburg, PA 17101, or, if you prefer, a donation to a charity of your choice in Jim’s name.

Farewell to a dear friend and humanitarian. You will be missed!

I was a Product Development Engineer from 1977 until AMP was acquired. I met and worked with Jim on multiple occasions and, as many have said here, he was an absolute gentleman and an inspiration to me. RIP sir. Jim Wolowicz

Melinda and family, Know that you are in Kirk and I's thoughts and prayers. Jim was a very kind man, we will always be thankful for the friendship Kirk, I and Blake shared with both him and you.

Jim was the least status-conscious executive I have ever known. He treated everyone with friendliness and respect, from the lowliest "cub" engineer to the Chairman of the Board. RIP.

Jim was an absolutely personable and caring guy. I was fortunate enough to work with him at AMP's corporate headquarters. I provided him with help with his work computer although he was one of the most proficient I've ever seen with a PC. I also got to meet with him and Melinda at their beautiful home in Perry County. They were both most gracious hosts even though I was just there to help with computer issues. They both made me feel right at home. Jim was so down-to-earth and always had a...

Jim, you were a wonderful leader of AMP and a personal mentor to me from 1986 to your retirement. May God bless you and your family you have left as your legacy. Frederick R. And Barbara Dublin

When ever Jim would visit our plant or office, regardless he would always say hello to me and remembered my full name. Only on a few occasions would I have conversations with him. He was a GREAT listener. RIP Jim.

Never miss an update about JAMES. Sign up today.