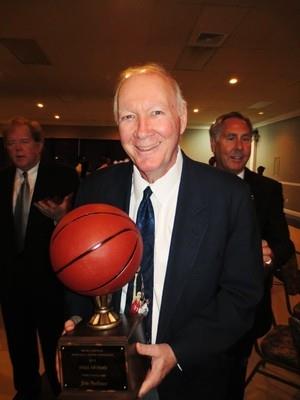 Not the right person? See All ›
AGE
77
LOCATION
Madison, Tennessee

Jim graduated from East High School in 1960 then attended Belmont College on basketball and baseball scholarships. He began teaching in MNPS at Carter Lawrence Elementary School as a PE instructor then taught Health at North High School at Whites Creek High School. He retired from teaching but continued to coach basketball at WCHS then later at Antioch High School. Jim coached 47 years with the primary sports being basketball and track. As the Head Basketball Coach, Whites Creek High School went to the State Tournaments in 1993, 1998, 2006, and 2007 and in 2008 at Antioch High School. He received many honors for his coaching abilities and cherished the induction to the Metro Basketball Hall of Fame in 2014. His legacy lives on in former athletes as they coach young athletes.

His remains are at Spring Hill Funeral Home and Cemetery, Madison, TN where services will be conducted on Friday, October 11, 2019 at 10 am with an hour of visitation prior. Service will be officiated by Russ Corley. Visitation with the family will be Thursday, October 10, 2019 from 4 to 8 pm. Pallbearers will be Danny Bloodworth, Morris Conyer, Larry Lefkovitz, Robert Murray, Nicholas Nollner and Tyler Nollner. Honorary pallbearers will be all former athletes from North High School, Whites Creek High School, Antioch High School along with coaches.

You will continue to be an inspiration and admired by all. You set a legacy that is unmatched and will always be embedded and remembered in the heart of high school sports. But most of all, your caring, humorous and tough love nature that will live in the hearts of all of us that you touched. Take your rest and know that you have many of fans that loved you dearly.

Rest in peace to an awesome teacher and coach. You will be missed. Prayers to the family.

RIP to a great coach and even better Man, great character and sense of humor. You will be missed... WCHS Football ........#13 Box

From the Staff of Spring Hill Funeral Home & Cemetery.