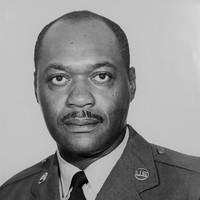 I have fought a good fight, I have finished my course;

I have kept the faith:

Brother James Patterson, was born October 25, 1935 in Sunshine, La to the late Jimmie Patterson and the late Florence Thomas.

He accepted Christ at an early age at the First Mount Carmel Baptist Church, Sunshine, La. He then became a member of the Ebenezer Baptist Church(Burtville, La) where he remained until his passing.

Brother James Patterson was educated in the Iberville and EBR school System. Following high school, he entered into the U.S. Army and later transferred to the U.S. Air Force where he remained until retirement as a U.S Air Force Master Sergeant. While stationed in Maryland he met, and married his wife Valerie Burke on February 23, 1968. While stationed in Okinawa, Japan their eldest daughter Kamilla Fair was born on May 29, 1971. Three years later while stationed in Kinchloe Michigan their youngest daughter, Nikita Butler was born on March 8, 1974. After Retirement from the Air Force he returned to Baton Rouge, La with his family to reside. He was employed with the Ryan Airport as a Sgt in the Police/ARFF Division where he remained until his Retirement in 1998.

Because of his interest and talent in Photography, he ventured into entreprenurialship by starting NikiKam Photographer as a contracted photographer with a focus on weddings and family photography.

A very special recognition to his niece Victoria Lorraine for all of her care and support throughout.

The family wishes to extend a hand of gratitude to Our Lady of the Lake Hospital, Kleinpeter Physical Therapy, Dr. Yushen Lee (OLOL Primary Care) and St Joseph Carpenter House and for their care and service.

I love you dad . Always will. You were the best godfather a girl could have. I can still hear your laugh. You loved unconditionally. Even after nanny left , you honored your commitment as my godfather. I had more to share with you, but I thank God most for sharing you with me. I love you forever. T

So sorry for your loss. Condolences to the family.

Sending my sympathy, condolences, and love to the Patterson family. Uncle Jimmy was such a beautiful and genuine soul with a golden smile... always shining God's light. Growing up, I remember him being an awesome husband, father, and uncle.... and he was an amazing photographer. I loved him and will miss him so much. I pray that God gives the family comfort, peace, and strength. Love you all. ~Daphne Videau

Offering prayers for a fallen Soldier.

My deepest sympathy to the Patterson family in the loss of such a wonderful man. Praying for strength for the family.

Heartfelt sympathy from Mary Harbor and family. We will miss our buddy, Mr. James Patterson.

On behalf of the friends from the "Kinch" (449th Bombardment Wing, Kincheloe AFB, MI 1975-1977) expressions of deepest sympathy to the Patterson family. "Sgt" as we called him was truly a great man who had a positive impact on all those who stepped in his circle. He will be deeply missed. May God give you the peace that surpasses all understanding.

To the Patterson Family, you have my deepest sympathy and condolences on the loss of Uncle Jimmy. He was truly a good and kind person and loved his family. He will be truly missed by his family.Remember all the good times you shared with him.

I LOVED MR. JIMMY SO MUCH, HE WAS MY BUDDY. HE WILL BE GREATLY MISSED. CONDOLENCES TO THE FAMILY MY FAMILY. I LOVE YOU ALL!!!