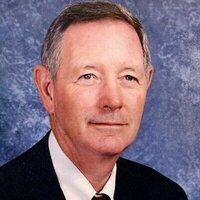 Jim passed away on Tuesday, December 21, 2021 in Austin, Texas, at Elmcroft Memory care facility where he had been staying the past two months.

Jim Wright graduated high school from Robert E. Lee in 1959. Jim went on to obtain his associates degree at Tyler Junior College (TJC) where he received a scholarship for football and played in the Rose Bowl for the National Championship and was later inducted into The TJC  Sports Circle of Honor. Jim went on to continue his football career as well as furthering his education, receiving his bachelor’s  degree at The University of North Texas. Jim received his Masters Degree at Stephen F. Austin University and his superintendency certification at Texas A&M University. Jim was happily married to Lynnetta Wright for 57 years, in which consisted of many joyful days of traveling, enjoying family and friends, chasing grandchildren, and involvement with church fellowship. Jim had many accomplishments throughout the years such as: being a member of The Rotary Club, Lions Club, honored as Superintendent of the Year from Region 7, being inducted into Bullard Hall of Fame for BISD, and more. Jim was a school superintendent in Bullard I.S.D. where he retired with 46 years in education, ending his educational career at Region 7 Educational Center where he was a field service agent, supporting local superintendents. Before being a school superintendent, Jim touched many lives through his teaching and coaching at various schools in Texas. Jim was known for his quick wit, caring heart, giving spirit, and big smile. Jim never met a stranger and would be the first to give you the shirt off his back. His hobbies included: golfing, reading, gardening, especially tending to his roses, as some would say he had a “green thumb,” and watching sports as well as western movies.

Jim was preceded in death by his parents, A.J. and Lois Wright. Jim is survived by Lynnetta Wright, his wife of 57 years; sons and their wives, Greg and Leslie Wright of Prosper, Texas, Eric and Missy Wright of Driftwood, Texas; granddaughters, Ashley, Brooke, Brittany, and Erica Wright; step-daughters, Kendyl and Kinsey Stevens, as well as his sister, Doris Pitts of Whitehouse, Texas.

Pallbearers will be Greg Wright and Eric Wright

If desired, memorials may be made to Tyler Junior College Scholarship Foundation.

I have known Jim and played golf with him since moving to Emerald Bay in 2008, and it has been a pleasure. He was always a real fun person to be around. I am sorry for your loss. He will surely be missed by all.

In 2002, Jim gave a 54 year-old man who was four years into a second career a chance at Bullard ISD. While he was old-school in his use of technology, he gave me the support I asked for to take the district to a new level with instructional technology. He will be missed.

Butch was one of the first guys I met when my family moved back to Tyler in 1954. He helped me make friends at Hogg Junior High. We leaned heavily on him in our days of playing sports, especially as the running back and punter on our football teams at Hogg JHS, at Robert E. Lee HS, and at Tyler Junior College. Such a great guy. We'll miss him Lynetta. R.I.P. Butch. Bill Bridges.

Mr. Jim Wright was well respected in Lufkin and school districts around Texas. He was a great leader at Lufkin High School for the teachers and students that were under his care. He was a quiet man so when he spoke, it meant volumes to us. I learned so much as a teacher from Mr. Wright. He was very caring and kind to everyone. Prayers for Lynetta, Greg and Eric.

Jim was one of the nicest and most popular guy in high school and beyond. It was a pleasure to know him and Lynetta. My prayers are with the family. Peggy Baldwin McFarland.