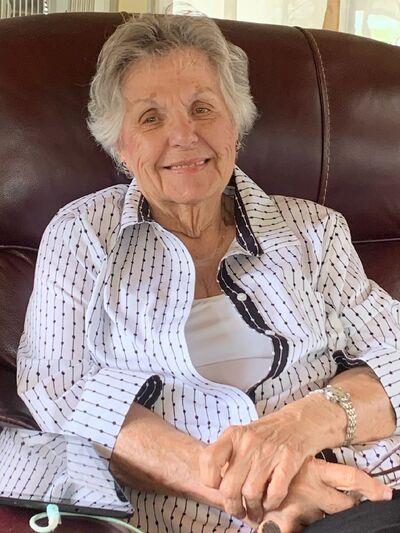 Jeanne Groves, loving wife, and mother of four sons died Sept. 4, 2020 at the age of 88.
Jeanne, a coal miners’ daughter was born in Wilkes Barre, Pennsylvania on July 22, 1932 to Benjamin and Stella Casner. After high school, she moved to Phoebus, VA and became a secretary at Fort Monroe where she met and married Sergeant James (Jim) Groves on September 12, 1951. Jeanne and Jim moved many times until his retirement from the Army, including posts in Germany, Louisiana, Oklahoma, and Arkansas before settling down in Smithfield in 1964. They raised four sons, James, Benjamin, Dean and Mark.
Jeanne had a passion for family, friends, and community. She was a foodie and was a well-known talent preparing wonderful meals not only for entertaining family and friends, but also managing the Smithfield Inn, partnering in a seafood restaurant and a catering business. In addition, Jeanne authored the “Do You Want to Eat” cookbook.
For many years, Jeanne was active with the Smithfield Little Theatre, both at its original Cotton Gin location and its current home, often in starring roles such as Mother Superior in Nunsense. Not only did she donate 143 pints of blood to the American Red Cross, but for years she also prepared sandwiches and cookies for the canteen. Jeanne was always a strong swimmer, had a long history of supporting the YMCA and until the age of 86 led deep water aerobics classes. Jeanne was also a member of Trinity United Methodist Church.
Jeanne and Jim enjoyed a long and healthy retirement. They became “snowbirds” driving their minivan across the USA for months if not seasons at a time, visiting family and friends from coast to coast.
Jeanne was preceded in death by her father, Ben, mother, Stella, husband, Jim, son, Benjamin (Buck), sister, Leona, and brother, Bernie. Jeanne is survived by three sons, James (Wanda), Dean (Mary), Mark (Michelle), and the joys of Honey’s life, eight grandchildren, Nick, Rob, Jessica, Katie, Victoria (Drew), Mark, Anabelle and Andrew and two great grandchildren, Riley and Declan.
The family is ever grateful for the care taking and companionship of Cheryl Latimer and Sabrina Batten, as well as the Isle of Wight Rescue Squad and Sentara Obici Hospital. A graveside funeral service will be held at St. Luke’s Cemetery on Friday September 11 at 11:00 a.m.
In lieu of flowers donations can be sent to the American Red Cross or Smithfield Music, PO Box 157, Smithfield VA 23432.  Online condolences may be registered at www.littlesfuneralhome.com.

Aunt Jeanne was an amazing woman and will surely be missed. I have so many fond memories from my childhood and her spunk was inspiring. Keeping her and the family in our hearts and prayers.

What all loss to all who were lucky enough to know Jeanne and call her a friend! She was one of a kind and never met a stranger!

She was a sweetheart.

I am so sorry to hear of Jeanne’s passing. She was truly a remarkable lady with a great sense of humor.

I remember her as an instructor for swimming aerobics. Then as Honey to her grandchildren. I remember visiting her sister on her deathbed. She knew her mind and spoke it. God rest her soul.

I am so sorry for the loss of mother, grandma hunny, friend. Condolences and thoughts of you today.

Jeanne was the first person I ever met in Smithfield. Little did I know then all the adventures, laughs, good times, good foods and a long list of other good things we would share. She was the best and my life has been blessed to be able to call her a friend.

It's hard to know where to start. She was my aunt. She was my dad's younger sister. She was one of the funniest persons I'd known, growing up. This woman was not shy at all. She was an aunt you could have fun with. And she was full of warmth and love. I only wish I'd had the chance to see her more than just the few times I did throughout the years. And now I wish I could give her one more hug.

I loved this lady! Will never forget her coming to my house to help me make crab stuffed flounder for a dinner party!!

Never miss an update about Jeanne. Sign up today.