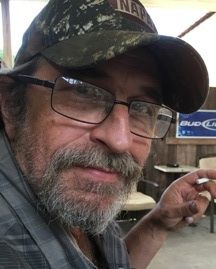 Memorial services for Jeffrey Parnell "Flicker" Thomas, 54, of Monroe, LA were held 2:00 PM, Friday, October 28, 2016, at Brown-Holley Funeral Home Chapel, Rayville, LA with Terry Laughinghouse, Carl Thomas, and Drew Laughinghouse. Mr. Thomas was born December 30, 1961 in Natchez, MS and passed away on Monday, October 24, 2016 in Dallas, TX with his best friend, Lewis Rogers and beloved dog, Gilligan. He is preceded in death by his father, Denton L. "Flop" Thomas and maternal grandparents, J.P. and Oma Smith. Jeff spent much of his spare time enjoying life who was a respected craftsman who tinkered and restored items, especially in the area of metal works. An avid Outdoorsman, he loved both hunting and fishing. He was retired from TL James and was a welder by trade. Those who knew Jeff knew how he treasured his time with his dog, Gilligan. Jeff was a loving husband and father and is survived by his wife, Susan Thomas of Rayville, LA; daughter, Jessica Snyder and husband, Mike; mother, Mary Evelyn Berret of Natchez, MS; step-father, Robert E. Berret of Natchez, MS; brother, Carl Thomas and wife, Paula of Paoli, PA; sister, Cheryl Laughinghouse and husband, Terry of Russellville, AR; sister, Robin Berret of Houston, TX; nephew, Drew Laughinghouse and wife, Brooke of Dardanelle, AR; niece, Sara Laughinghouse of Fayetteville, AR; 5-stepchildren, Jerry Brunson and wife, Jerri of Haughton, LA, Paul Adams, Anna Lord and husband, Eddie, Nicole Johnson and husband, Josh, Tori Turbeville and Joseph Sylvestri all of Rayville, LA; 11-step grandchildren all of Rayville, LA; stepmother, Fleeta Thomas of Natchez, MS.

So sorry for the loss of your brother Carl . I remember him so well when I was at your Moms home in Natchez . So sad he had such a very short life . Hope you are doing well . Think of you often . The good ole days I didnt realize ,
but they too are gone forever .

Susan & family, so sorry to read about Jeff. Know I am thinking of all of you. Prayers and love are surrounding all of you.

Heartfelt condolences to the family. May God grant you peace and comfort as you go through this very difficult time.

Never miss an update about Jeffrey. Sign up today.