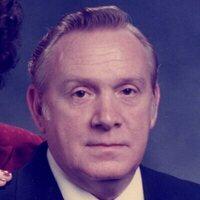 Services for Jerry Black, 87, of Tyler are scheduled for 10:30 a.m. Saturday, November 6, 2021, in the chapel of Burks-Walker-Tippit Funeral Home, with Bro. Sam DeVille and Dennis Black officiating.  He will be laid to rest at Liberty Hill Cemetery in Tyler, Texas, under the direction of Jackson’s Burks Walker Tippet Funeral Home.

Jerry Black went to be with his Lord and Savior on October 30, 2021 in Bullard, Texas.  Jerry Black was born February 18, 1934 to Archus Carroll Black and Lillie Frances Millington.  Jerry was the youngest of six children and he was preceded in death by his siblings, Mervin, Durwood, and Horatio Black, Frances Florence and Melba Adams.  Jerry provided for his family by working thirty-five years at La Gloria Oil & Gas Refinery.  He was a strong, determined man who enjoyed nature, hunting and fishing.  He enjoyed working on cars and loved hot rods.  But, most importantly, he told his children he had asked Jesus Christ into his heart to save him.

Survivors include a son and daughter-in-law, Dennis and Pam Black of Whitehouse; a daughter and son-in-law, Dianne and Wayne Parker of Mt. Selman; four granddaughters and their husbands, Camille and Adam Ward; Amanda and Wes Cook; Jessica and Brandon Fulton; and Maci and James Rozell.  Jerry is also survived by eight great-grandchildren, Ella and Molly Ward; Koda, Kolt, Tucker and Tate Cook; and Cheyanne and Aubrey (due February 2022) Fulton.

The family will receive friends at Jackson's Burks Walker Tippit Funeral Home from 6:00 to 7:30 p.m. Friday.

If desired, memorials may be made to The Hospice of East Texas Foundation, 4111 University Blvd., Tyler, Texas  75701.

To the Family of Jerry Black
So sorry for your loss of your father , grandfather "Big Black" Jerry is my last Millington first cousin to pass away .❤ You all will be in my Prayers for healing of your hearts . Jerry is rejoicing in Heaven with all his family that went before him . He's was a Great Man ❤
Darilou Millington Hardaway & Malcolm Hardaway

Sorry to hear about the loss of Mr. Black.

Our condolences to the family