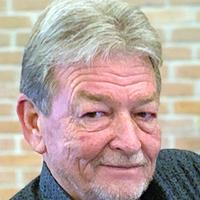 He was born on November 6, 1958 in Creole, LA to Chester and Alberta Boudreaux.

He lived most of his life in Cameron and worked for Cameron Rental for 20 years and most recently worked for OEG Offshore. He will be remembered as a loving father and grandfather who enjoyed spending time with his grandchildren, washing his truck and mowing his grass. Boudreaux never met a stranger and was a great example and teacher to his children and grandchildren.

He was preceded in death by his parents; and JR’s father-in-law, Earl Guthrie.

His funeral service will be held at Our Lady Star of the Sea Catholic Church on Friday, August 7, 2020 at 1 p.m. under the direction of Johnson Funeral Home. Rev. D. B. Thompson will officiate. Burial will follow the service in Our Lady Star of the Sea Cemetery. Visitation will be held at Johnson Funeral Home Thursday from noon until 8 p.m. with a rosary being recited at 6:30 p.m. Visitation will continue at the funeral home Friday from 11 a.m. until noon.

Jerry was a wonderful man
My prayers go out to his family. For I know he will be missed greatly. God Bless all of you

Thinking of you all with heartfelt sympathy and prayers in the untimely passing of our dear friend, Jerry. We were glad to have known him and always enjoyed our visits together. May you go Rest In Peace, our Buddy, until we meet again.

We are So Sorry to hear of
Jerry's passing. We are Praying for
Gods Comfort for All the Boudreaux Family!
Rest in Peace Jerry!

Deepest condolences to Boudreaux's family. He was always such fun to listen to.

Work at superior supply and steel and have dealt with him for over 20 yrs. Such a nice man to deal with!
Prayers!!!

Rest In Peace my friend,you will be missed!

GOD'S BLESSINGS to each and every one, especially during this wearisome journey cousin Jerry, you will be dearly missed

I knew him most of my life, he always had a smile and a good thing to say about someone. He will be missed!

My most sincere condolences to the Boudreaux Family. I grew up with Jerry and his siblings in Cameron. Every time I saw him, he was always kind and friendly and could talk for hours. May you rest in peace.

Our Lady Star Of The Sea Catholic Church