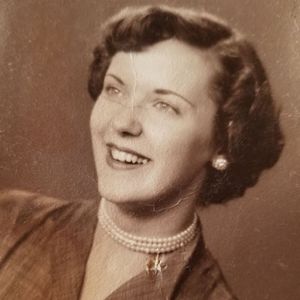 Some mother's bake cookies and teach their daughter's to appreciate being a housewife. Our mother taught us to go out and see the world, read the classics and appreciate a good gin and tonic. Joan Augusta Butler was not always a conventional mother but she was a terrific one who was loved and admired by her three daughters, Eileen, Carol and Laura. Our mom was strong, smart and sharp as they come. Joan Augusta Burns was born and raised in Jamaica, Queens, New York during the depression. Her father, Joseph, mother Augusta and brother Joseph shared a one room cold water flat in a tenement building. Later she would tell us how her family would often split a can of Campbell's soup for dinner. Her lean upbringing taught her the values of hard work, education and survival. She taught us a hat pin could be a weapon in the right hands while riding the subway. And she was proud of her unladylike behavior when she supposedly picked up a piece of broken pipe on the street to defend her younger brother from neighborhood bullies. She was a New Yorker who both loved her home city but was not sad to leave it behind when she met the love of her life, Orville Dean Butler. Our dad asked mom to dance one night at The Crazy Horse Lounge while he was a Cadette at near by Kings Point Naval College. She had found her man in uniform and they enjoyed a long happy life together until his death in 2017. Mom would brag about how handsome he was in his uniform. Together they raised a family of three daughters, eight grandchildren and three great grandchildren. While they called many states home it was Crofton, Maryland where they spent most of their time. Mom had many diverse interests over the years. She was proud to show her champion German Shepard, Beuwolf. In fact, our mother rarely cooked a day in her life but she would go to the butcher in order to prepare special meals for her beloved dog. She loved all animals from our dogs to the numerous hamsters we brought home. She was an avid gardener who labored over her yard for hours with great success. She loved a good mystery novel or series, something she happily shared with her granddaughter Sarah. With our dad she traveled to the Caribbean, the Panama Canal and all over the United States including spending many winters in Hawaii. She loved a good time whether it was attending her weekly BINGO game, enjoying a fine meal out with her family or going to a local craft show . We all inherited her independent spirit. She studied to be a legal secretary later in life even though she didn't need to work and before it was common for women to want a career. But mom wanted her own money and her own identity, she was in inspiration for us all to make it on our own. Mom was from the generation who dressed well, smoked too much and enjoyed a proper daily cocktail. She was quick with a quip or a hug and she will be missed. On Sunday evening, August 4th she passed away peacefully surrounded by family. Her wishes were to be cremated and her ashes and dad's mingled together to later be scattered in the Ocean. Mom was a devout Catholic who belonged to the Saint Elizabeth Anne Seton Parish of Crofton, Maryland.She is survived by her three daughters, Eileen Friend of Annapolis, Maryland, Carol Noble of Hanover, Pennsylvania and Laura Need of Fairfax, Vermont.

Need help with this Obituary?