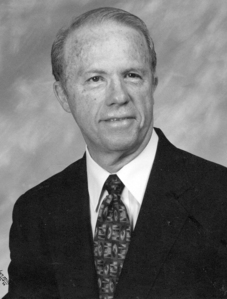 Not the right person? See All ›
LOCATION
Waco, Texas

Joe was born in Waco on February 27, 1935, to Buster and Kathrynne (Westerfield) Gough. He lived his entire life in Waco where he attended Waco schools, graduating from Waco High School in 1953. Joe was an outstanding high school athlete in both football and baseball. He continued playing both sports during his college years at Baylor University, where he lettered in baseball. Joe Bob graduated from Baylor in 1957 with a Bachelor of Science Degree in Physical Education and later earned his Master of Education Degree.

After beginning his teaching career at Lake Air Junior High School, Joe was called to serve in the U. S. Army. Upon release from active duty, he continued to serve in the Army Reserve. Over the next 32 years, Joe pursued a successful career in Waco ISD as a teacher, coach and principal. Upon retirement, Joe Bob found a new home as principal at St. Mary's Catholic School in West, where he loved and cared for the students and staff an additional 14 years.

Joe met the love of his life, Linda Corroone, in high school. The couple was married on June 29, 1958, at St. Mary's Catholic Church in Waco by Monsignor Mark Deering. Joe and Linda were actively involved in the lives of their three children. They spent many hours supporting their children in various sports and activities at St. Louis School, Reicher Catholic High School, McLennan Community College and Baylor University. Joe was a member of the Knights of Columbus, a charter member of St. Jerome Catholic Church and a teacher of the Protecting God's Children program. He was also an active member of the Waco - McLennan County Retired Teachers Association. Joe rarely missed a Baylor sporting event and could be counted as one of Baylor's biggest fans.

Joe Bob touched the lives of so many people. Whether he was refereeing or umpiring a game, volunteering with an organization, or working in a school setting, Joe loved and cared for others. He had a strong faith in God and passed his Christian values onto his children and grandchildren. His kind heart and thoughtful presence will be missed by all.

Joe Bob Gough was preceded in death by his parents; his sister, Marie Antoinette Gough; and his great-granddaughter, Clara Gough.

He is survived by his beloved wife, Linda; and their three children, Robert and Diane Gough of Waco, Richard and Cindy Gough of Hewitt, Teresa and Dalton Raney of Mesquite, Nevada. Joe leaves behind his seven grandchildren; Ryan and Angela Gough of Kailua, HI, Riley and Tami Gough of Hutto, Patrick and Elizabeth Gough of Kingwood, Randall and Delia Reyes of Waco, Ansley Gough of Waco, Austin Gough of Dallas, and Aubrie Gough of Waco. Joe's legacy is continued through his four great-grandchildren; Kayleigh, Adilynn, Ethan and Connor. He is also survived by his aunt, Irene Westerfield, and many precious cousins.

The family thanks Mr. Frank Mejia, Joe's best friend and Baylor patriot, for the loyalty, devotion and spirit he shared, especially over this past year. A truer friend there could not be. We would also like to thank the caring staff at St. Catherine's Center and Providence Hospice for the love they showed our dear Joe.

In lieu of flowers, memorial donations may be made to St. Mary's Catholic School in West.

Never miss an update about Joe. Sign up today.