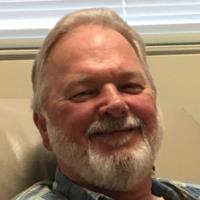 On February 14, 2020 John Burnett was able to proclaim he had fought the good fight, he had finished his race and he had kept the faith; a crown of righteousness is now his.

He is survived by his wife of 37 years, Karen who he loved with every breath he took. His children that he prayed for and always supported, Wendy (Dewayne) Wheeler, Steven Ray, Tabatha (Marc) Smith, and Jonathan (Jessica) Burnett.

He is also survived by siblings created by marriage but cherished all the same Debbie (Myrt) Donnahoo, Michelle (David)McAlhaney, Jerry (Karen) Donnahoo), and Terri (Doug)Basch. He also has numerous nieces, nephews, and other extended family members who knew and loved him.

John was a Deacon at Alford Baptist Church and had a heart burdened for those going through difficult times. He loved people without judgement. He had a prayer that all would see the change Jesus had made in his life and would come to know the Savior.

The light of our family has dimmed a little with his loss, but Heaven has gotten a whole lot brighter with his arrival.

A celebration of John’s life and homegoing will be held Wednesday, February 19, 2020 at 2 pm at Alford Baptist Church, Alford, FL with Brother Bob Johnson officiating. The family will have a time of visitation one hour prior to the service.

Arrangements are under the direction of Obert Funeral Home, Chipley, FL.

Please know I am there in spirit! John was so special, I will miss his wonderful smile and loving hugs.

You are truly going to be missed Uncle Johnny! Til we meet again love Terri

You continue to be in our thoughts and prayers. There are no words great enough to comfort you, but we love you and are always here for you.