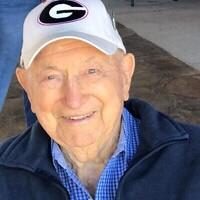 John Patton Dempsey passed from this life on October 8, 2020, just a few days after celebrating his 100th birthday.  John was born in Floyd County, Georgia on September 20, 1920 to Lucille Patton Dempsey and John Reece Dempsey.

A lifelong scholar, John graduated from Model High School in 1937 and University of Georgia in 1941.  After serving in World War II, he completed his Masters Degree in Agriculture Economics at UGA.  Continually striving for higher learning, he received a Bachelor of Law Degree from Woodrow Wilson College of Law in 1962.

John married the love of his life, Grace Meenan Dempsey, on May 1, 1943.  A veteran of World War II, John enlisted in the Army Air Corp where he served as an aircraft engineer and flight instructor, obtaining the rank of Sergeant.

John established the Dempsey Agency, working for many years as an insurance and real estate agent.  Always a hard worker, additionally, he was building houses and apartments and maintaining the family farm raising cattle, pigs, and chickens.  He was also an avid gardener, providing vegetables and fruit for his family and friends.

As a civic-minded person, John was actively involved in several organizations.  With the Travelers Protective Association, he served as State President and National Treasurer.  In the American Legion Post 5, John was Post Commander and a member of the Honor Guard.  With the Cattlemen’s Association, he toured farms and ranches in other states with the Georgia delegation several times.  As a member of Ruritan National, John served in several capacities before becoming National President in 1989.  He also helped establish many new Ruritan clubs in the Southeast.

Due to COVID restrictions and concerns, the family will hold private services on Wednesday, October 14.  Grandsons and great-grandsons will serve as pallbearers.

In lieu of flowers, donations may be made to the Friendly River Homemakers Club – Scholarship Fund, ℅ Phoebe Cornett, Treasurer, 304 Bells Ferry Rd, NE, Rome, GA 30161.  John’s mother was a charter member of this club, his wife, Grace, was an active member, and daughter, Marie, is presently a member.

I have known John Dempsey a long time as my father had car insurance with him and for a period I worked in his office. Charles and I spent time with him and Grace at many Ruritan functions. He will be greatly missed and our deepest sympathy goes to Marie and all the family.

John and Grace were dear friends in Ruritan. We know they are together now in heaven.
Our love to the family. Ben and Carol Crawford

To Marie and the entire Dempsey family, I was saddened to read about Mr. Dempsey's passing. Please accept my deepest condolences.
Your father was a fine person.
Sincerely,
Janis McGee Johnson