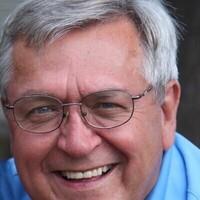 He was born on May 7, 1945, in Effingham, Illinois to Leland “Six” and Pauline Williams Keith.  John received his business degree from Millikin University and owned and operated ACE Hardware stores for over 30 years in Raleigh, NC.  On June 11, 1947 he married the love of his life, Nancy Freischlag Keith.  They raised two daughters, Kelly and Michelle; and son Michael and he could often be found coaching his kids on the soccer fields.

John was a devoted father and a wonderful grandfather.  He enjoyed taking pictures of his family and sunsets.  His hobbies included tennis and pickleball.  He also loved playing cards, mahjong, and poker.  He was known by all for his big heart, willingness to help anybody, great sense of humor, and memorable practical jokes. Many people considered John a father figure or a wise mentor.

John had a passion for Jesus and for serving others.  He earnestly volunteered at Pine Valley United Methodist Church as a greeter, usher, communion server, and was active in the Celebrate Recovery Program.  He recently went on a trip to Israel and referred to it as “a trip of a lifetime.”  He was also a passionate volunteer with One Love Tennis and tutored children in their Academic Enrichment Program.  His impact was big everywhere he served.

I knew Mr. Keith since I went to school with twins Michael and Michelle. He was always a kind decent hard working man and was always kind to me. He contributed a lot to society with his presence. He will be very missed and raised three exceptional children.

On behalf of the New Hanover County Law Enforcement Association we recognize John E. Keith's life of commitment to his Family, his Lord Jesus, his Church, the Ace Hardware Co. and his time and support to NHCLEOA. The men and women of NHCLEOA honor the memory of John and how our Lord used him as an exemplification as how we should live.
Our prayers go out to Michelle and Michael and the entire family.
Sincerely humbled,
The Members of New Hanover County Law Enforcement...

My sincere sympathy to John's family. I was very fortunate to get together with my cousin several times in the last couple years and enjoyed hearing about his family and their activities. He also shared stories about his trip to the Holy Land. I will always remember one special day at the Art Museum in Raleigh. We not only shared the art but also fond memories of growing up together in southern Illinois. With Love and Blessings. Carolyn Callis

Such a loss of a wonderful man. He will be missed at church and in our neighborhood as he took his morning walks and stopped along the way to visit. Our hearts hurt for his family who must
continue this earthly journey til they are reunited.

He always had a smile on his face and made you feel like he cared for you. He will be missed at Myrtle Grove.

John was a delightful, welcoming, funny man who always made people feel at ease. He was a fine cribbage opponent and will be sorely missed.

We will truly miss chatting with John while on walks, his sense of humor, his smile and his always joyful demeanor. We are better for having known him. Rest well, neighbor. Our prayers are with the family. Alice and Jeff Carney

While this world lost an extraordinary father, an outstanding mentor, and an excellent friend...heaven has gained another faith-filled servant. John made a huge impact in helping me trust and admire individuals. His generous spirit completely disarmed and invited us to come close, smile and receive a bit of encouragement...he knew it mattered. I thank God for this man and this world won't be nearly as authentic without him. Thanks!