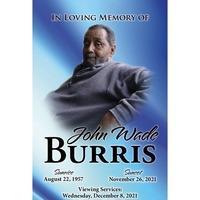 John Burris 64, was born August 22, 1957 he was a lifelong resident of Springfield, Illinois.  John was called home to be with his heavenly father on November 26, 2021 at Memorial Medical Center.

John was married to Margo Nelson for over 24 plus years, through these years, their love blossomed and they were inseparable.

John enjoyed hanging with the fellas drinking his beer and talking mess. He enjoyed a “good time”.  He was often the life of the party.  He was an avid watcher of the I.D. Channel and the Nascar races.  He was smart. He could fix almost anything.

John shared the same compassion as his wife. He loved animals.

John is preceded in death by his parents Gus and Mary K. Gilbert, his biological father John Jones Sr., a brother Francis Burris and other extended family members.

My dear cousin you will surely be missed. You had a good heart and your reward shall be in his kingdom. you ran a good hard race we all just wish it was a little longer.

This is so sad for me. BaBa was like a brother to our family. He truly was the fulfilled one at the functions, saying something to make you laugh. Such a fun spirit he had. He will truly be missed. My brother from another mother. RIP To the entire Burris family prayers going up for you. Lift your eyes to the hills whence comes your help Psalms 121:1

MY PRAYERS FOR THE FAMILY.
BABA WAS A VERY GOOD MAN.
MAY GOD BE WITH YOU ALL.

May good Lord continue to watch over you, be with you and strengthen the family during this time of loss and bereavement. My prayers are with the family.

My sincere condolences to the BURRIS FAMILY! R.I.H.Baba!!

Uncle Baba...I love you so much! May you rest peacefully. Love your "Chelly Belly"

I'm gonna miss you. Thanks for taking care of Margo. You were her life line. I'm glad you two can still be together. Your are an awesome person. Luv u!

Our family chain has been broken in two spots and nothing seems the same but as God calls us one by one we will fix our chain link by link.

Never miss an update about John(BaBa). Sign up today.