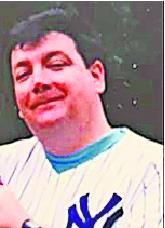 Joseph D. Malloy, 58
'Possibly the biggest Yankee fan ever'
Joseph D. Malloy, 58, passed away on Monday, Nov. 11, 2019, at Carmel Richmond Nursing Home after a lengthy illness.
Born April 12, 1961, Joseph was a lifetime Staten Island resident. He was the son of Rosemary (nee Sanford) and the late Joseph M. Malloy, and beloved brother of Marianne Malloy, Terese Tarasiewicz, Thomas Malloy, Kathleen Petersen, Richard Malloy and the late Frank Malloy and Elizabeth Hartell.
He was a longtime employee of Garban Ltd, a brokerage firm, in lower Manhattan. He was possibly the biggest Yankee fan ever, and took great pride in being born in 1961, the year Roger Maris hit 61 home runs.
"No one was more generous, thoughtful, or kinder than "Joe D." as his fellow Yankee fans sometimes called him," said his family. "No one had a bigger heart. If he was going to a game or concert and you ran into him, you were included in on the trip, frequently with him providing the tickets and refreshments. He will be sorely missed by his numerous friends and family."
Since Joe had a lengthy and difficult illness, please join us to help celebrate his life and the end of his suffering with his family who wish to remember happier times for Joe.
A. Azzara Funeral Home, 183 Sand Ln., South Beach, has been entrusted with Mr. Malloys funeral arrangements, which include a memorial visitation on Saturday from 1 to 3 and 5 to 7 p.m. A chapel service will be on Saturday at 6 p.m. at the funeral home. Arrangements also include private cremation.

Went to high school with Joe and shared many a laugh! He was a great spirit. Didnt know he was ill. My condolences to his family and all those who loved Joe. To know him was to love him.

It would be impossible to be a better brother than Joey! IMPOSSIBLE!
Tommy

I will remember Joey as a devoted brother and kind soul. When his sister got sick - he was always there. He did her laundry, ran her errands and helped with her young daughter. May he rest in a well earned eternal peace, reunited with his beloved Lizzy and family.

Joey always took care of everyone he touched especially the younger kids in our neighborhood. He was kind and generous. He will be sorely missed. Rest in Peace, Joey.