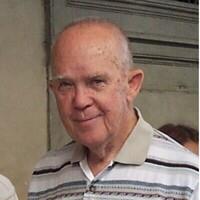 McMahan, Joseph Wayne. Born October 19, 1931, in Wilburton, Oklahoma. He was the second son of four (Kenneth, Donald, and Ronald), born to Cleta Pearl (Edge) and Joseph Lacey McMahan. The family moved to Detroit in the late ’30s when his Dad began working at Wilson Dairy.  When brother Ken enlisted in the Navy, Joe followed. He served in the Korean War on the aircraft carriers USS Philippine Sea (CV-47) and USS Hornet (CV-12). After traveling the world with the Navy, he was honorably discharged in 1955.  In 1959, he was set up on a blind date who, fortunately for all of us, was a no-show.  Instead, the matchmaker sent him to meet Betty Bates, who was at the diner celebrating her birthday with a friend. After much internal debate, Betty opted to give him her real phone number and, after dating for two months, they were married at a small church on top of Monte Sano Mountain in Huntsville, Alabama.  Shortly after that, they moved to Italy, where he installed missiles for the US Government as an employee of Chrysler Electronics.

After returning from Europe, Joe was a regional service manager for Applied Research Laboratories, a subsidiary of Bausch and Lomb, retiring after 30 years.  During his career, he worked with a close-knit group of fellow managers, who became life-long family friends.

In the late 1970s, Joe joined the leadership of the Boy Scout Troop “The Great 1148”. There he served alongside good friends, Bob Paddy, Jess Young, Ron Taylor, Tony Balnik, and Jim Sullivan.  In addition, he led three expeditions of Scouts, two of them coed, to Philmont Scout Ranch in Cimmaron, New Mexico. The two coed groups included his entire family.

In retirement, Joe picked up a “side job” working security at Greenfield Village and Henry Ford Museum and The Rouge Ford Factory Tour. There, as usual, he made many friends, shared in many potlucks and laughed a lot.

He loved the peace and quiet of great outdoors, the magic of Lake Michigan and Lake Superior, as well as birdwatching and hunting. He was very proud of his wife, children and grandchildren.

Joe died peacefully at home, surrounded by his family, due to complications of a stroke that occurred in April of this year.  He is survived by his wife of 62 years, Betty, his sons James Steven (Heidi Williams) and Tim (Tracy VanDusen), and his daughter, Jenny (Matt) Stimac.  Eight grandchildren, Aubrey, Emily, Mickey, Caitlin, Jordan, Erin, Benjamin, and Mackenzie. One great-grandchild, William. He was preceded in death by his parents, Joe and Pearl McMahan, his in-laws, Sam and Willie Mae Bates, his brothers, Ken and Ron, his daughter-in-law Jennifer McMahan, and his beloved granddaughter, Katie Stimac.

Cremation has taken place. A Celebration of Life and a military burial will take place at a later date.

In lieu of flowers, the family requests donations be made to The Katie Stimac Carter Scholarship and sent to Joe and Betty’s home. This scholarship is awarded to a graduating Saline High School senior who is pursuing higher education in the helping professions, health related fields or fields involving advocacy for humanitarian causes.