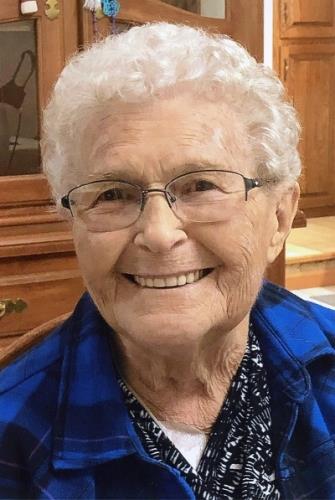 Not the right person? See All ›
LOCATION
Mandan, North Dakota

Josephine Keller, 89, Bismarck, passed away Feb. 19, 2021, at CHI St. Alexius, Bismarck. Mass of Christian burial will be held 11 a.m. Tuesday, Feb. 23, at Pro Cathedral St. Mary's Catholic Church with Msgr. Gene Lindemann officiating. Visitation is scheduled from 5 to 7 p.m. Monday at DaWise-Perry/Mandan Crematory, 4211 Old Red Trail, Mandan, with a vigil/rosary service beginning at 7 p.m. Visitation continues one hour prior to the service at the church. Burial will be in St. Mary's Catholic Cemetery, Bismarck.

Josephine (Wolbaum) Keller was born on their family farm north of Braddock on Aug. 27, 1931 to Harry and Josephine (Mitzel) Wolbaum. She was baptized at St. Katherine's Catholic Church in Braddock where she also received the sacraments of the Eucharist, Reconciliation and Confirmation. The family relocated to their farmstead west of Braddock where Josephine was raised as the only sister to seven brothers. She was educated at a nearby country school.

Mom always said that when she died she didn't want a lengthy obituary. "All you need to say is 'Those who knew me, knew me. Those who didn't wouldn't care.'" What Mom didn't understand is that those who didn't know her, missed out. So, while she rests in peace, a small part of her story will be told.

Mom met and married our dad in 1949 and started their farm north of Braddock. This was the start of a 67-year partnership. In that marriage they raised a family of 13 children and thousands of chickens. The farm was always a place of hard work, discipline as needed and plenty of fun. In addition to being a farmwife and mother, Mom busied herself as a seamstress and with Dad, they ran an upholstery business. Mom also taught religion classes for many years, was an active member of St. Katherine's Altar Society, served as an assessor for the Wild Rose Township and also served as a school board member.

Mom was a mom to many, both young and old. In a small community, she was always ready to step up to the plate. She knew her way around a hair clipper and played barber to a handful of neighbors. Rarely did she cheer on her children in a softball game without backing it up with a roaster full of fried chicken for the team. She was always a second score keeper at basketball games just in case the first fell asleep on the job. She often volunteered to drive for school functions when there was a need, and if you were in her station wagon you likely spent your time singing or praying. She was a creative thinker and used this skill in every way possible.

Mom had a sense of humor and this along with a side of trickery reached so many. Rarely did she alter a piece of clothing for someone without leaving a surprise stitch somewhere. One time her trickery even got the best of her own children when she showed up at school as the Easter Bunny. We all went home that day talking about this mysterious rabbit and she didn't say a word.

Mom and Dad continued to farm until 1987 when they moved into Braddock to take on the jobs of school custodial staff and cook. It was in 1991 that they moved to Bismarck where they managed apartments until 2014. During these years Mom formed many new friendships. She was active in the St. Mary's Altar Society and the church choir. As her health declined, Mom formed friendships with those who cared for her specifically the staff at the CHI Kidney Dialysis Unit and the wonderful, caring staff at Northland PACE for whom she was so grateful.

The family wants to extend their greatest appreciation to the PACE staff for their compassionate care and endless support for Mom and the family, particularly over the last three months. You have become part of our family as she always enjoyed seeing every one of you throughout the day.

Thank you to Dr. Kayani and the Palliative Care team for their guidance, care, and support through this process. Thank you, St. Alexius nursing staff, whose compassion made this a peaceful transition for our mom.

For Mom, life was a selfless journey. She kept her heart full by doing for others. She had endless love for her four boys and nine daughters. If someone needed a pair of hands, she found a way to offer three. When God entrusted her with a talent, she accepted the responsibility and used it well. If someone told her she can't, she found a way to show that she can. May she now rest peacefully.

Funeral arrangements are being made with DaWise-Perry/Mandan Crematory, Mandan.

Sincere sympathy to the Keller family. Josie always had a smile for everyone. She was a special person. Eunice Swanson Nelson

She truly was a great lady.

Your Friends from Vern Eide

My deepest sympathy to the whole Keller and Wolbaum families. I have fond memories of so many interactions with Josie. Her calm demeanor, witty sense of humor and so talented with everything she did. My thoughts and prayers are with all of you!

My deepest sympathy! Her infectious smile will be forever in my heart! God Bless

My heartfelt sympathies to the whole Keller clan! My favorite memory of Josie is of her coming to a party at the gravel pit, it was around midnight. It may have been my senior class´ graduation party(?) She had the biggest silver mixing bowl I´d ever seen filled with BBQ´s made with homemade buns. She passed them out to all the party goers. She was one of the kindest, mom-to-everyone-in Braddock, woman I had the pleasure to know. Good and faithful servant, Rest In Peace!!

So sorry about the loss of Josie! She was such a kind person! What a great role model for her kids, grandchildren, and friends! Sending hugs and prayers to the family! Sincerely, Deanna and Patrick Woodson and Lyle and Jean Grenz

My deepest sympathy to all of you. Your mom was such a wonderful sweet lady. She did some sewing for me and we always had such good visits. She will be deeply missed. My thoughts and prayers are with you all.

Never miss an update about Josephine. Sign up today.