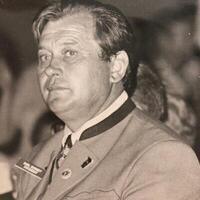 Karl was born in Mulheim Germany where he studied his apprenticeship for Master Plumber. At the age of 20, he came to the United States and started a new life in Delaware. Karl became a US citizen and proudly served in the US Army.

Karl started his career working for County Plumbing & Heating for 18 years and then a Self-Employed Master Plumber and Heating Contractor for the next 35 years until his semi-retirement at the age of 73.  Karl continued to practice his trade for a few more years for family and close customers.

Karl played soccer from an early age in Germany and continued his love of the sport in the US playing for the Delaware Saengerbund Kickers as well as coaching.  Karl was an outdoor enthusiast who loved hunting, fishing and family camping trips.  He was an avid gardener, beekeeper, raised chickens and geese.  He loved to bake and more recently loved his Hallmark movies. He loved spending time with his family and especially his grandchildren, who fondly called him Opi; and all the many annual apple and peach picking family outings.

He was preceded in death by his Mother Anna Schoof Schmidt who died in 1938 and his Father and Step-Mother, Bernard and Franziska Schmidt.

Funeral services will be held on Thursday, July 30th at Daniels & Hutchison Funeral Home, 212 N. Broad St., Middletown, DE 19709. Visitation will be from 11 am – 12 pm. Service will begin at Noon. Graveside service with military honors will be private.

So sorry to hear of Karl’s passing. We wish we could be there with you. Fondest memories of all the years that we were neighbors on Muggleton Road. Our thoughts and prayers are with you and your family. With deepest sympathy at this sad time, Paul and Charlotte Caldwell and family.

May God Grant your father eternal rest and let his perpetual light shine upon him. May his soul rest in peace Amen.

Memories of many happy days at the Delaware Saengerbund. Condolences to the family.

Our thoughts and prayers are with the entire Schmidt family. We will miss uncle Karl, his stories and his smile. May you find comfort in this time of loss.

Dear Amy and Schmidt Family, I'm so sorry to hear of the passing of your father. My thoughts and prayers are with you and your Family.

Dear Martha and Schmidt family,
We were saddened to hear of your dad's passing. We pray your good memories will give you all comfort.
Peace and love,
Cindy and John Fauerbach

To all of the Schmidt Family,
I was so sad to hear of Mr. Schmidt's passing. My thoughts and prayers are with you all.

Fran & Family,
I am so sorry to hear of Karl’s passing. My prayers are with you.
Love to all,
Betty Truitt

Never miss an update about Karl. Sign up today.