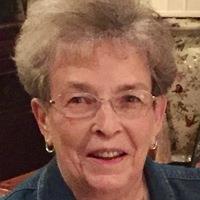 Katherine Marie Parks Crawford went to be with her Lord and Savior, Jesus Christ on January 6, 2022.  She was born in Houston County, Texas on March 11, 1935, to parents Hubert L. and Mary Katherine (Lockey) Parks.

Katherine grew up mostly in small towns in East Texas, following her father’s career as a high school coach, which eventually took them to the West Texas town of Water Valley.  After graduating as Salutatorian from Water Valley HIgh School in 1953, where she enjoyed playing basketball and tennis,  Katherine attended and graduated with her Bachelor of Arts degree from Stephen F. Austin State College in 1956.  She later received her Masters Degree from The University of Texas at Tyler.

While attending SFA, Katherine met her sweetheart, Joseph A. Crawford, and they were married on June 9, 1956 in Nacogdoches, Texas.  They soon moved to Houston, Texas where they lived with their two daughters, Denise and Jan before returning to East Texas in 1972 and settling in Tyler.  She enjoyed a long career as an educator, retiring in 1997 from Chapel Hill ISD.

Katherine enjoyed family gatherings, cooking, entertaining friends, and cheering for the Texas Aggies.  She especially loved being active in her church community.  Wherever they lived, she and Joe were always involved in the Baptist church.  Over the years, she participated in many ways, including some of her favorites; singing in the choir, attending WMU (Women’s Missionary Union), and helping with Friendship International.  She was a longtime  member of Green Acres Baptist Church prior to her death.

A private family burial service will be held at Cathedral of the Pines Cemetery in Tyler, with Pastor Kenneth Meadows presiding. In lieu of flowers, please make donations to Green Acres Baptist Church.

I've known Ms. Katherine for about 10 years. What a precious lady. I can't ever remember seeing her without a smile - even when she didn't feel well. She was well loved by all her friends. God bless her family.

I have great memories working at Chapel Hill with Katherine. She was a great teacher.
Also I had the pleasure to teacher Denise and Jan.
She will be missed .

We'll be missing you, Kate, at the Memorial this May. Will always remember your peppery wit and grateful for your suggestion that my grandchildren call me 'Gigi', rather than anything else. Rest easy, Kate.

Never miss an update about Katherine. Sign up today.