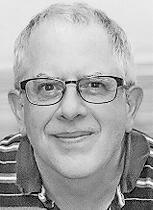 He was married in 1978 and moved to Howell in 1984 to raise a family with his wife, Barbara. Kevin was known as a creative man with a sense of humor who was quick with a joke and always willing to help someone in need. After studying graphic design Kevin worked at Pathmark designing the weekly circular and helped his wife run a successful house cleaning business. His passions included cooking, photography, golf, music, his family, traveling with his wife, and caring for pets.

He is survived by his wife, Barbara; three children Adam, 38, Matthew, 35, and Kyle, 33; mother, Shirley; sister, Audrae, and his stepbrothers, Dale and Alan Jones.

The family asks that in lieu of flowers, please make donations to the Scleroderma Foundation.

To the entire family, my deepest condolences.

I will always remember your quick wit and great smile. We had a lot of fun in the"good 'ole days" Hope you are at peace now and not suffering anymore. Say "Hi" to Bonsey for me, he'll show you around. RIP

Never miss an update about Kevin. Sign up today.