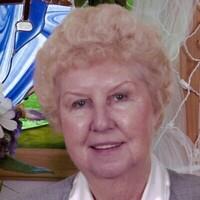 Koeta was born January 29, 1940, in Portland to Leahman and Faye Sexton. She grew up with her younger sister, Barbara, and her younger brother, Thomas. Her given name has Native American roots, but she found most people have a difficult time pronouncing the 5 letters. Her preference is “koh-EE-duh.” She adopted the nickname Jo, and most people know her by that name.

She enjoyed living on the farm where she could pick strawberries, raspberries, and blackberries. She attended Boring Grade School and Willamina High School graduating in 1958.

Jo married early, had a lovely daughter named Judy, then divorced. At age 23 she married George Passmore, a Navy veteran, who was 10 years older. They had no children together.

Jo and George lived in Portland. While there, Jo worked at Meir and Frank in the interior design department.  She used that experience throughout her life.

Jo and George moved to Ilwaco in 1985. For about 15 years they enjoyed the life of snowbirds, driving as far south as San Diego and staying at various parks along the way.

They drove from Ilwaco to Christian Church of Warrenton for 25 years until moving to Warrenton where they lived three blocks from the church. At the end of January 2021, they moved to Astor Place Assisted Living in Astoria. On March 14th she entered Columbia Memorial Hospital in Astoria and was kept comfortable until her death on March 19th.

While at Crossroads Church in Portland, Jo got excited about missions. She was part of an active ministry there and brought that enthusiasm to Christian Church of Warrenton when she and George moved to the coast. She served as the chair of the Missions Committee for many years.

She joined a group of other church members on a trip to Zimbabwe in 2007 (at age 67) as they worked on “Warrenton House,” the church’s contribution to the orphanage there. It’s no small feat to complete the required vaccinations and then fly 20 hours to the other side of the world. She’d already been there twice before!

For years she drove the church van to pick up children in Astoria and Warrenton to bring them to Sunday School. That required getting up early and picking up the van. Then she would take them all home. It was a great act of love and service. In recent years Jo taught a weekly Bible Study at the Astoria Rescue Mission’s women’s house until her health didn’t allow it anymore.

Jo's favorite color was red. She brightened their homes in Washington and in Oregon with it. She enjoyed her home’s landscaping front and back, spending time clipping, weeding, and rearranging. However, such activities were not possible in her last years as she suffered from cirrhosis of the liver and osteoporosis.

Miss you Grandma Jo! I hope you've found everlasting peace with our Father.

Never miss an update about Koeta "Jo". Sign up today.