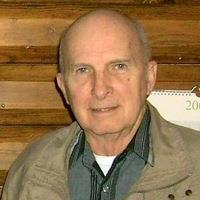 Lary grew up in Teton, Id, attended elementary schools in Teton and graduated from South Fremont High School in St. Anthony in 1956.

While stationed in the Panama Canal Zone he met Diana Dina DeFrees. Three months later on April 21, 1967 they were married in Rexburg, Idaho.

After high school he enlisted in the US Navy where he served for 24 years, 21 of which were spent overseas. He served in Japan, Iceland, Italy, Panama, Spain, Germany, and Hawaii.  During the Cuban Missile Crisis he served aboard the research vessel, USS Oxford. During the Blockade he served on 2 aircraft carriers, the USS Independence and the USS Enterprise. He also served aboard the USS Lapon, a nuclear submarine. He retired in 1981 as Cryptologic Technician Senior Chief.

After retiring from the Navy, Lary and Diana bought a home in Vancouver, Washington to be close to Diana’s family. Lary accepted a job at Willamette National Cemetery in Portland, Oregon. As Lary said it required a lot of work and care to maintain the beauty and respectful reverence of the grounds. As Maintenance Foreman he was proud of his part in honoring veterans. Lary retired for the second time after working 14 years at the cemetery.

Lary and Diana moved to Blackfoot in 2004 to be closer to family. Lary enjoyed planting a small vegetable garden at their home. He looked forward to working in his garden, yard and attending the livestock auction on Fridays.

He was preceded in death by his first wife Delone; his parents and his sister Anabell Jacobson.

Funeral services will be held at 2:00 p.m. Wednesday May 5, 2021 at Hawker Funeral Home. The family will meet with friends one hour prior to the service at the funeral home.

Friends and loved ones that prefer to stay home can watch the service on a live broadcast. The service can be viewed at https://www.hawkerfuneralhome.com/page/broadcasting.

Lary was a great bother and playmate as we grew up. But after separating for many years, reconnecting these past few years has been a great experience. It was amazing to us both as we discussed our careers how closely we connected in our work. The many talks on the phone and visits to your home, have been special to me, as well as Mardette. I am glad I got to work with him on his history and to get to know your family. You have some great kids and grands. We were glad to learn about...

Aunt Diana, this is Heidi Gayle's daughter. I'm sending my condolences and my thoughts that Uncle Larry must have been a wonderful man. I'm glad you're still my Aunt Diana.

So sorry to hear of Lary's pass. He was a hard working man. Glad that I could call him a Friend.

God bless your journey home to Glory Dad didn’t get the honor to meet you yet knowing mom & Jimmy your well represented! God be with you until we meet again. ❤

Was stationed with Lary at Rota and also the Canal Zone. A really nice guy and always had time for his men. Farewinds and following seas senior chief. Phil Shortall CTR1 SW MTS Ret

Never miss an update about Lary. Sign up today.