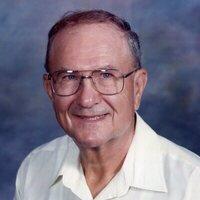 Lauren Eugene Orr was born on July 11, 1929, in a little farmhouse near Ware, Iowa, to Miles and Elizabeth (Lyons) Orr. Lauren began his education in Ware, attending Kindergarten through 10th grade. After his family moved into a different school district he completed his education in Laurens, graduating in 1946. Following graduation, Lauren enlisted in the United States Army. He was honorably discharged two years later. After returning from the service, Lauren worked for Quaker Oats for in Ware and Havelock and then in Rodman for a total of seven years. He then began working for Pocahontas Rural Electric Cooperative, where he was employed for thirty five retiring in 1989. He continued working summers on the pole testing crew.

Lauren and Mary Ellen Hauschen were united in marriage April 8, 1951 at the St Paul Lutheran Church in Emmetsburg, Iowa. They were blessed with seven children.

Lauren was a devoted member of St. Paul Lutheran Church where he served as Financial Treasurer for two years. For twenty five years he cared of the grounds at St. Paul and did outside maintenance. He also served as a Trustee for six years.

Lauren enjoyed gardening and had up to four plots at one time at the Community Gardens. He gave much of his harvest to Upper Des Moines and the area nursing homes as well as to neighbors and friends. Lauren was also an avid reader and enjoyed reading western novels. After moving to Lakeside Lutheran Home for a short time, Lauren passed away on July 21, 2020 at the age of 91. He was preceded in death by his parents;   his wife, Mary in 1985; a daughter, Barbara Orr in 2019; brothers, Richard Orr; Dale Orr and William Orr; sisters, Mildred Stearns and Marge Steward.

My sympathy to all the Orr family.

Thinking of you & yours...love ya Dave Orr. Bill & Sue Hilgendorf

We are so sorry to hear of your father’s passing. I always loved his great sense of humor. I fondly remember many visits to your house and overnight stays. Gary and I enjoyed sharing memories of those visits. I always felt welcomed. It was wonderful to see him at Mom’s funeral. You are in our thoughts and prayers.

May your hearts soon be filled with wonderful memories of joyful times together as you celebrate a life well lived.J

My deepest sympathy to you all during this difficult time.

So sorry for your loss. He lead a long great life.

To Orr family,. so sorry to hear about your dad..always enjoyed chatting with him whenever we would meet...your family was always special to us since you were the first fill we met when we moved to Emmetsburg. RIP my friend.

Dear Orr family,
Mom and I are saddened by the loss of your father. He was very kind man who will be messed dearly by everyone.
Prayers for you and family during this time of sorrow.

Never miss an update about Lauren. Sign up today.