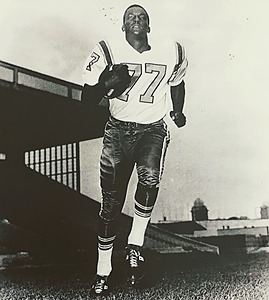 Not the right person? See All ›
Created by Audrey Sampson and has not been verified by Legacy.com or our partners.
BORN
February 16, 1937
DIED
March 17, 2019
AGE
82
LOCATION
Los Angeles, California

Mr. Lee O Sampson, of Compton, California, born in February of 1937 in Memphis, Tennessee, to the late Annie Bell Sampson and John L Sampson, passed away at age 82 on March 17, 2019 in Los Angeles, California. In Compton, California, he attended Lincoln Elementary School, Willowbrook Jr. High School, and was in the first graduating class of Centennial HIgh School in 1955. Lee was a hometown hero and excelled in basketball and track but most notably football. As a Mighty Apache of Compton Centennial High School he was player of the year in 1953 and established many records, He continued his education at Compton Junior College, and while there his team were victors of the 1955 Jr.Rose Bowl played in Pasadena, California which was controversial because the integrated Compton team almost didn't play due to the protests of the all-white Jones Jr. College of Mississippi. Lee served in the United States Army and stationed at Verdun, France and played basketball during his tour of duty.

After receiving an honorable discharge from the Army, he enrolled in New Mexico University as a student athlete. He was captain of the football team but one of his greatest achievement was marrying a smart and beautiful NMSU cheerleader, Janet Morgan of Chicago, IL. A true love story! Lee was drafted to the Canadian Football League and played with the Toronto Argonauts and Hamilton Tiger Cats from 1964 to 1965. Thereafter, he returned to the Compton area where he was heavily involved in community organizations that focused on rebuilding Watts after the riots. He co-founded AVIM, a minority owned aerospace parts supplier, as well as Hickory Pine Pre-School where scores of children began their road to excellence via hands-on, quality child development program. The same year he joined the California Board of Realtors and began a lifelong career in real estate. He continued to be very involved in his community and served as an elder at First Christian Church in Compton, as a local football coach, Boys Scouts pack leader, and mentor of many young people in Watts, Compton, and Lynwood. He was also a committee member of Lynwood Personnel Commission and Lynwood Planning Commission.

Later in life he explored his creative side and his hobbies included photography, gardening, writing and painting. He self-published, "Dreams Come True" which he described as an African American version of "American Graffiti". He was a self-taught artist and many of his artwork and photos have been exhibited in local galleries.

Friends and family can pay their respects during his wake on Thursday, March 28 from noon to 6:30 p.m. at Robert L Adams Mortuary Inc., 501 E Palmer St, Compton. A viewing will be held on Friday, March 29 at 9:30 a.m. until 10:30 a.m. followed by a celebration of life, officiated by Pastor, Dr. S. L. Garvey, at 10:30 a.m. at First Christian Church which is housed at the Compton Seventh Day Adventist Church.

Family,
May the love that you have and the memories that you shared continue to strengthen you. The love that Mr. Sampson shared is everlasting and is reflected in everyone and everything he touched. I am glad that my son had the opportunity to spend some time with him. May you continue to feel comforted by the love and support of family and friends.
Love you much!
Michele Tobin and Family

While I didn't meet your dad, Mr. Sampson, I met your mom, Mrs. Sampson, sister Audrey, your nephews, wife and of course Mr. Wabi. I was VERY sadden to hear of the passing of your dad. He (along with your mom) raised an exceptional person. I pray that the memories of your dad will comfort you during the difficult times. You and your family are in my thoughts and prayers. *virtual hugs*

My heart goes out to you, Janet. Losing your life partner is very difficult. I pray for the comfort of Yahweh to be with you always.
Patricia Wyatt

My condolences to the entire Sampson family. Mr. Sampson was such an honorable man who positively impacted my childrens lives, as well as mine. The world will not be the same with him not here. May God comfort you all in this difficult time. (Elaine (Guillory) Allen)

It was a blessing and an honor to have known you as one of my dearest friends husband, as a friend, as a neighbor, and as one of the most authentic and brutally honest people I have ever known. Two words that were constant in your conversations were authentic and
family both of which you treasured as part of your core values. I appreciate that you embodied a great manly role model for Janet, Kevin, Audrey, your grandsons, your blood relatives, your huge number of friends, as well as for...

Lee, I call you the Tony Robbins of our family. You were one of the most positive, uplifting people I've ever known. Thank you for the countless nuggets of wisdom. I will carry them with me along with the memories. I will never forget you. R.I.P. until we meet again.

Mr. Sampson, I love you with all my heart. Thank you for all that you did by being an example of man by taking care of your family and by being there for everyone who came in your presence. Thank you for being there for my family and taking me under your wing and teaching me lessons that I will never forget and will cherish for the rest of my life. It hurts me that I didnt see you but I have wonderful memories and lessons that I hold dear to my heart. You taught me to be authentic and to...

He made his presence known and he shall never be forgotten. You will be sadly missed, Uncle Lee. Thank you for the indelible memories. Love, Leslie & family (NYC)

Never miss an update about Lee. Sign up today.