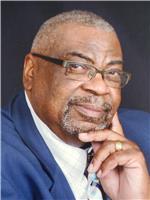 Not the right person? See All ›
LOCATION
New Orleans, Louisiana

Leon Richard West "Chef" suddenly passed away on Friday, August 21, 2020. He was born in Cambridge Massachusetts to the late Harold West and Dorothy Rose. Chef West was preceded in death by his lovely wife, Joyce Ann Newson West. Beloved father of Linda Perreira, Jessie Perreira, Sabrina Newson King, (Craig L. King), Robert L. DeRosa, (Joyce DeRosa), Sherry L. West, Louise B. West, Leona R. West Garner, (Dorian Garner) and the late Sonya Marie West. Beloved brother of William West (Christine), Jerome West (Yvonne), Carolyn Pinckney (Robert), Charles West, the late Constance Smith (Joseph), Patricia Merritt (Willoiam) and Harold West, Jr. (Judith). Leon studied culinary arts at Massachusetts Vocational and Technical Programs where he obtained his culinary arts degree in 1978 and started his career working for the Sheraton Hotel and Headstart food service programs in Cambridge, Mass. Shortly after, He became a chef for the Aramark Corporation where he worked in Boston, Massachusetts and Atlantic City, New Jersey. In a short five years, the company offered Mr. West the position to work in New Orleans during the Worlds Fair, thus making him the first executive chef of the New Orleans Convention Center. Chef Leon held that position for twenty-five years. As Chef Leon reinvented his career, he created a line of seasoning named Chef Leon West Spices with Chef Leon West. He later became a consultant and the Executive Chef for Messina's on the Lakefront. A Funeral Service honoring the life of Mr. Leon West "Chef" will be held at the church he loved, New Hope Baptist Church, 1807 Rev. John Raphael Jr. Way, New Orleans LA 70113 on Tuesday, September 1, 2020 at 10 AM. Repass following. Visitation 9 AM IN THE CHURCH. As mandated by the State of Louisiana due to the Covid 19 pandemic, attendance is limited. Everyone is required to adhere to all restrictions. You must wear a face mask and practice social distancing. Please sign online guestbook at charbonnetfuneralhome.com. Charbonnet Labat Glapion, Directors (504) 581-4411.

I worked with Leon during the World's Fair in New Orleans and many other events for years. He was one of the nicest and greatest men I ever knew. I will miss him and his humor!

My condolences to the West family.

Chef Leon was not only a great chef he was a great person to a lot of us.
Thanks for being a great friend.
May God bless you and your family in this time of sorrow.

My condolences to the West family. I was honored to work with Chef Leon at the New Orleans Convention center. He was truly a great man.

As Cousins and Aunt of Leon we are saddened by the loss and send our sincere condolences to his family. May God comfort you in your time of need. From Edwina, Adean, Vera and Aunt VA, Cambridge, MA

Condolences to the Family of Chef Leon West. Great Man .

Never miss an update about Leon. Sign up today.