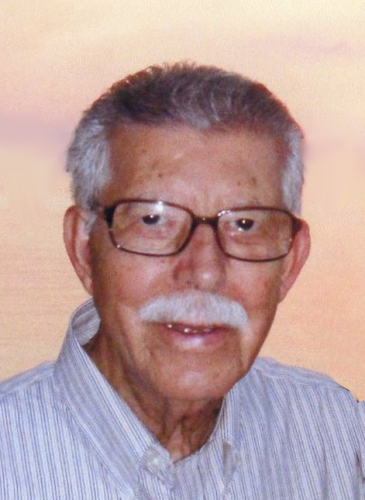 Not the right person? See All ›
LOCATION
East Moline, Iowa

Lorenzo T. Sandoval, 92, East Moline, passed away peacefully just as Christmas Day dawned on Friday, December 25, 2020, at his home, surrounded by the care and presence of loving family. Private family services will be held at Van Hoe Funeral Home, and entombment will be in St. Mary's Mausoleum. In lieu of flowers and gifts, memorials may be made to Our Lady of Guadalupe Catholic Church, Silvis, where he was a member. In light of the COVID 19 crisis, the family intends on having a Celebration of Lorenzo's Life at a later date.

Lorenzo T. Sandoval was born on August 10, 1928, in Silvis, IL, the son of J. Refugio and Luisa (Trujillo) Sandoval. The family moved to Mexico where he spent most of his childhood. He returned to the United States as a young man; later, he married Beatrice Martinez on May 24, 1950, in Peoria, IL. Before beginning his long career at John Deere, Lorenzo worked for the Rock Island Lines Silvis Shops, then the Rock Island Millwork. At John Deere he ultimately worked at its Foundry where he was a radiographer.

He loved to read, and was a great story teller. He enjoyed traveling, especially taking day trips with his wife. He was once featured on Iowa Public Television in a special documentary about the Hispanic experience in the Quad-Cities. Two years ago, Lorenzo and Beatrice enjoyed the 90th Birthday Party held for them in Des Moines.

He was preceded in death by his parents, his wife, Beatrice who died this past November, and twelve brothers and sisters.

Never miss an update about Lorenzo. Sign up today.