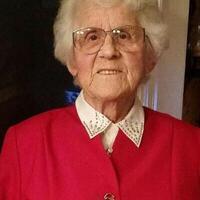 Lorraine Carter, 95, of Lecanto FL and formerly of Derby Line VT, passed away in Hospice Care, in Lecanto FL, on January 11, 2021. She was born in Newport VT on November 15, 1925, as the middle child of nine, to William and Marie Wheeler. She grew up in Newport VT and graduated from Newport High School in 1943. She married Charles Cook in 1946 and they lived in various towns in Orleans County until his death in 1976. In addition to raising their family, she assisted Charlie in his various business interests and was a popular waitress for many years at the Candlepin Restaurant in Barton. In 1980, she married Richard Carter and they enjoyed traveling around the world and splitting their time between homes in VT and FL. After Richard’s death in 2008, Lorraine lived for several years with her son Larry in MD and later resided in Sunrise Manor in Island Pond and Michaud Manor in Derby Line. In October of this year she moved to Florida to be near her son David.

While living in Glover VT, Lorraine was very active in the Home Demonstration Club and the Mother’s Club associated with the schools. In her later years, she and her husband Richard were very active members of the Grange at both the local and state levels. Dancing was a passion of hers that she enjoyed and participated in all of her life. She was an accomplished singer and was a welcome addition to various church choirs. She also enjoyed walking and found time every day for long walks, which continued well into the years that she needed a walker. She was an avid and accomplished painter and had gifted nearly everyone in the family, with one or more of her paintings. She loved sitting outside, just to enjoy the beauty and the fresh air. She had a penchant for family get togethers and, even into her 90s, she enjoyed playing cornhole and other lawn games.

Lorraine is survived by her son David Cook, and his wife Fe, of Hernando Florida, her special nephew Chuck Cook, that she raised as her own for the first nine years of his life, of Higginum, Connecticut, her daughter-in-law Elizabeth Cook of Port Deposit Maryland, her brother Wayne Wheeler of Newport Vermont and her very good friend, Linda Cook of Barton, Vermont. She is also survived by 6 grandchildren, 12 great grandchildren, 1 great-great grandchild and many nieces and nephews.

Lorraine was predeceased by her sons Russell and Larry, by her husbands Charles Cook and Richard Carter and by her siblings Olive, Irene, Geraldine, Irwin, Wilma, William (Pete) and Johnny.

A memorial service and burial are being planned for the spring or summer, when friends and family can gather safely following COVID restrictions. Online condolences may be made at curtis-britch.com. Arrangements are entrusted to the care of Curtis-Britch-Davis & Bouffard Funeral Home, Craftsbury Common, VT.

I really enjoyed visiting and taking Lorraine shopping for new clothes while she was a resident at MMM. I am so glad she got to go to Florida and be with her family. She spoke highly of you and was always so glad to ear from you so often. I took her once to her home in newport by the lake rd and she told me many great stories of her life. I will miss her dearly.

Dave. Sorry to hear of your lose. Sending prayers for the family.

I really liked spending time with Aunt Lorraine. She was a special lady.

We were all so blessed to have had such an amazing women in our lives She will be missed so much by all! Rest In Peace Grammy! And give my daddy a hug from me❤

I am so thankful I had such a caring Grandma in my life. You will be deeply missed. It’s not goodbye, but see you later. Say hello to Dad and Uncle Larry for me.

Dave, Sorry to hear of your Mom’s passing. She certainly lived a nice long happy life. Remember her from the Candlepin and many snow machine adventures with her and your dad.

My 1st mom I will miss you

David & Family, So sorry to hear of the loss of your mother. She certainly had a wonderful and exciting life in the Northeast Kingdom. Our prayers are with you during this trying time. God Bless!

Never miss an update about Lorraine. Sign up today.