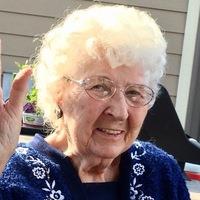 Lorraine was born in Chicago on November 13, 1924. She graduated from Schurz High School, where she was active on her school newspaper, creating crossword puzzles. Had dream of a floral designer career, but instead worked after high school as a stenographer until she married Mitch, September 3, 1950, and became a full-time wife and mother. Attended a few business classes at DePaul (or Loyola).
Later in life after raising her family, traveled throughout Chicago and its surrounding suburbs in a marketing position for a grocery distributor "Standard Brands".
Very active in all aspects of her church, including Guild of the Tabernacle, and a founding member, as well as president of St. Juliana's Friendship Club in 1987.
Rigorous Cubs fan, and lover of all sports, especially those in which her children and grand children participated, including baseball, softball, volleyball, soccer, basketball, badminton, and tennis.
Always welcomed a good polka, knew her way around the dance floor (Where she and Mitch first met), and had a special place in her heart for a good martini.
She played a great game of Scrabble, Yahtzee, bingo, canasta, LCR  and could be found at Arlington Park Race Track on Mother's Day or in the infield at the Kentucky Derby.
Never forgot to place a bet on March Madness and the Superbowl.
She will be greatly missed by her family and friends.
Family was most important to Mom.

My loving Godmother, you meant so much to me. You were always interested in my husband and kids; you remembered birthdays and special occassions; and I liked when you shared memories of your life. We’ll miss you deeply, yet we know you’ll be watching over us all.

Never miss an update about Lorraine. Sign up today.