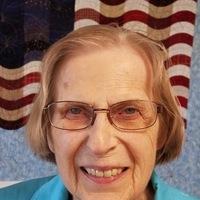 Marcene Gloria Miller was born September 25, 1933 on a farm one mile west of Chancellor, SD. She was the 4th of 5 children born to Matilda (Krull) and Elwood G. Miller. Marcene attended 8 grades at country school district #90 then was a cheerleader and graduated Valedictorian from Chancellor High School in 1951.

In 1954 they moved to Fort Knox, KY near Elizabethtown. A year later they returned to Sioux Falls, SD. To supplement their income, Marcene was employed by Power City Radio Co, Rich Brothers, Fireworks, Montgomery Wards in the Ladies apparel, church secretary at the First Reformed Church. For 11 years she was the receptionist for Dr. James H. Shaeffer, MD. During these years, they had two children, William Timothy (Tim) Kromminga and Melinda Jean (Mindy) Kromminga.

January 1, 1981 Marcene and Bill Kromminga along with Art and Lorna Sinkey formed the A & B Business Equipment, Inc., in Sioux Falls, SD where Marcene worked as the bookkeeper for 13 years until the business was sold in 1993. She continued to work part time there until she retired in 1995.

Marcene loved her church and was active as a Sunday School teacher and Bible School teacher. Along with Bill they were Youth Sponsors and Involved in Couples Club. She participated in the Reformed Church of America Women, Bible studies and many other activities. She attended the first service of Good New Reformed Church in the pastors home and became a charter member in 1980. Many of the church wood beams were stained and finished by Marcene with her favorite bible verses written on the back.

Funeral services for Marcene will begin at 10:30 a.m. on Tuesday, May 26, 2020 at Good News Reformed Church in Sioux Falls, visitation will begin at 9:00 a.m. at the church on Tuesday.

In lieu of flowers the family asks that memorials be directed to the Good News Reformed Church in Sioux Falls or Avera Hospice at Avera Foundation.

I'm so sorry to hear of Marcene's passing. She was a wonderful woman and will be missed. Keeping all of you in our.thoughts and prayers.

My sympathy to the family of Marcene. I worked with Marcene when I was a college student
at the office of Dr Shaeffer. Marcene was a great person and very professional in all her accomplishments. God rest her soul. Margaret Donohue Bruggeman

My condolences to the family . May you find comfort in your treasured memories
and Gods promise to return our loved ones . 1st Thessalonians 4 : 13 & 14 .

Bill, Tim and Mindy and family.

Im sorry to hear about Marcene passing. Blessings and peace to all of you during this time.

I will not be able to travel to Sioux Fall for the funeral. Hopefully I will be able to attend by Zoom.

Blessings to all of you!

I wish to express my sympathy to you and your family as i heard about Marcene,s passing. I will always remember the good times we had together, which i will forever cherish, Take care and i will keep you in my prayers as you go through the time of healing.

Bill, Tim and families - so sorry to hear about Marcene's passing. I think about you quite often but never get around to finding you. Take care and be at peace.

Bill & Family You have our deepest sympathy, we will truely miss you and Marcie at the Army Reunions. We know you have beautiful memories and nobody can take those from you. God Bless you and your family. We have you in our prayers.

Bill, Tim and Mindy, so sorry to hear of Marcene's passing. We have so many wonderful memories. Our prayers go with you at this difficult time.

Never miss an update about Marcene. Sign up today.