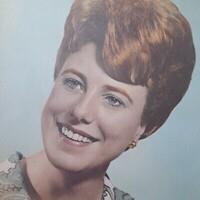 Margaret Elizabeth (Hunter) "Peggy" Johnson, 92, of Collingswood, NJ, returned to be with the Lord on Friday, October 15, 2021. She was a voracious reader and would read several books every month.

Peggy was the beloved daughter of the late William C. and Virginia (Wagner) Hunter, loving mother of Stephen (Linda) Johnson of Elmhurst, IL, and Garvin (Eileen) Johnson of Drexel Hill, PA, devoted grandmother of Christopher, Melissa and Lauren, great-grandmother of Madison and Autumn, and dear sister of David J. (the late Ann) Hunter, of Melbourne Beach, FL. She is also survived by nephews, nieces and her dear friend, Connie.

Most recently, she had volunteered for more than 20 years as a caretaker for shut-in senior citizens for the Camden County Division of Senior & Disabled Services, NJ. During her career Peggy held several jobs, particularly in the medical/nursing field. She had worked as a telephone operator, medical assistant, nurse (she received her Vocational Nurse License in California in 1954), and medical secretary, most recently with Thomas Jefferson University Hospital in Philadelphia, PA, and The Hand Center in Philadelphia, PA. Peggy served in the U.S. Navy from 1950 to 1952, during the Korean Conflict. She underwent basic training at the U.S. Naval Training Center in Great Lakes, IL, and earned her U.S. Navy Training Course Certificate (Hospitalman) in 1952 at the U.S. Naval Hospital in Chelsea, MA. She was awarded a Choir Certificate from the Great Lakes Choir, U.S. Naval Training Center, in 1950. After her military service she was a member of the American Legion.

In her civilian life, Peggy enjoyed performing in her church choirs. She was a lifelong member of various Protestant church denominations, including the Presbyterian, Methodist and Baptist churches, and most recently as a congregant with the First Baptist Church of Collingswood, NJ. Peggy was born in Pittsburgh, PA, in 1929. She graduated from Chartiers Township High School, Washington, PA, in 1948, and continued a lifelong friendship with her classmate Helen (Rittenhouse) Brautigam, who died in 2012. Peggy won the Chorus Festival Award from the Pennsylvania Music Educators Association, Western Division, in 1948.

She had been married from 1952 to 1962 to Theodore E. Johnson (late of Santa Maria, CA), whom she met while they were both serving in the U.S. Navy.

Peggy’s family especially wants to express our profoundest love and gratitude to her wonderful friend, Connie Priest, who was with her and helped take care of her for the last 8 years. Very important to Peggy, Connie’s companionship and care enabled Peggy to continue living pretty much independently until the end.

Also, we want to thank the very kind people at Laurel Manor Healthcare and Rehabilitation Center, Stratford, NJ, who cared for Peggy and assisted her family in her final weeks.

Relatives and friends are invited to attend her visitation on Thursday, October 28, 10 to 11 AM at the Foster-Warne Funeral Home, 820 Haddon Ave., Collingswood, NJ followed by the Memorial service at 11 AM.  The Rev. Brent Miller, of the First Baptist Church of Collingswood, will officiate. Peggy wished to be cremated; her ashes will be interred privately on a later date in a designated Veterans Cemetery.

After the services, family and friends are invited to a reception lunch at the Legacy Diner, 136 S. White Horse Pike (Rt. 30), in Audubon, NJ.

TO MY BEAUTIFUL & LOVING PEGGY. ❤ I MISS YOU SO MUCH!! WE WERE THE BEST OF FRIENDS. I LOVED TAKING CARE OF YOU. YOU REMIND ME OF MY MOTHER. VERY SWEET & A LOVING PERSON. MY HEART IS BROKEN, TO HEAR OF YOUR PASSING. YOU WILL ALWAYS BE IN MY HEART & MY PRAYERS. UNTIL WE MEET AGAIN, MY FRIEND. ALWAYS WITH MY HEARTFELT LOVE! CONNIE ❤❤❤