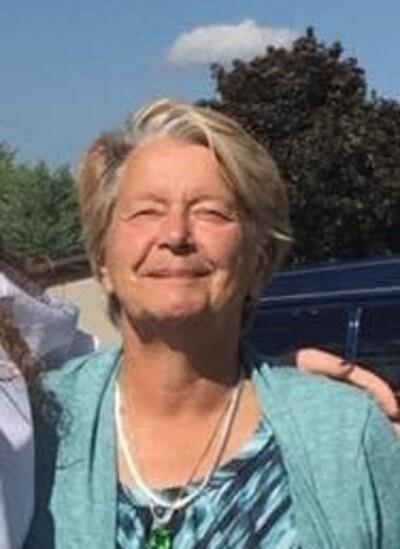 Peggy was born on August 30, 1947 in DuPage County, IL to the late walter and Margaret Bogusz (Kresnocki).  Peggy was a graduate of River Forest High School in New Chicago, IN.  Peggy had many interests in life but her family and particularly her grandchildren brought her the greatest joy.

Peggy opened and operated a storefront in Hobart where she sold her handmade pottery.  A woman of many interests, Peggy then became a truck driver.  Peggy loved seeing the country and traveling in her truck and even earned her Million Mile reward.  When she retired, she was able to stay home and help raise her grandchildren.  She enjoyed volunteering at her grandchildren’s school in many roles from the classroom to the choir room.  Peggy’s favorite season was winter.  She especially loved Christmas time and decorating with various trees and her special village.  Peggy also loved baking during Christmas and gifting her delicious cookies and nut rolls.

Peggy is preceded in death by her parents: Walter and Margaret Bogusz; and brother: Walter Bogusz.

Peggy is survived by her three children: Steven (Heather) Oslizlo of Hobart, IN, Michele (Anthony) Jarvis of Valparaiso, IN, and Nicholas (Melissa) Oslizlo of Columbus, MS; grandchildren: Madelyn Jarvis, Anthony “AJ” Jarvis, Zachary Jarvis, Steven Jarvis, Mackenzie Oslizlo, and Lucas Oslizlo; and many more family and friends that will miss her generous and beautiful spirit.

In lieu of flowers, memorial contributions may be made to a few clubs that Peggy enjoyed helping: Wheeler Choir or Wheeler Running Club.

God bless you and keep you in all of the places where you must go.

Mom you will be missed, we have had our arguments and disagreements. We never stay mad at each other long. You were there for me for all the up and downs. I miss you already, but you are no longer in pain or suffering anymore. I will always love you. Your Daughter Michele.

Never miss an update about Margaret "Peggy". Sign up today.